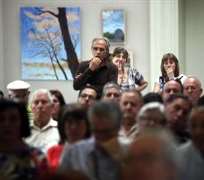 Spanish bank bad loans rose in March to their highest in 18 years, figures from the Bank of Spain showed on Friday, underscoring the problems facing the government as it attempts to clean up the sector and get its economy back on track.

The Bank of Spain said bad loans rose to 8.37 percent of the banks' outstanding loans, the highest since August 1994 and up from 8.3 percent in February, which was also revised higher.

The data came as Spain was set to name independent auditors to assess how much cash its banks are likely to need to rebuild their balance sheets.

Financial sources have said fund manager BlackRock and management consultancy Oliver Wyman would likely be named to conduct a deep audit of the sector, but a government source told Reuters a final decision had not been reached and BlackRock may have a conflict of interest.

An announcement on the auditors would come on Friday or Monday, several government sources said.

The Bank of Spain figures, released hours after a mass bank downgrade by credit ratings agency Moody's, showed losses from loans made in Spain's housing bubble are still rising.

Troubled banks, along with overspending in indebted regions, are the two biggest risks for Spain's public finances. Investors believe Spain needs to aggressively address these two issues to avoid an Irish-style bailout.

Banks expect bad loans to continue to rise this year as the economy contracts and the jobless rate remains painfully high at almost one in four of the workforce, the highest in the EU.

Against that backdrop, analysts estimate bad loans could rise to well over 10 percent of loans.

"The challenge is the non-performing loans portfolio that sits on their books and the direction of that (level)," Johannes Wassenberg, managing director of banking at Moody's, told Reuters on Friday. "The key is getting to the bottom of that, whether in a single entity or a consolidated basis."

A more immediate worry is if savers start to withdraw deposits. A report that partly nationalized lender Bankia had lost more than 1 billion euros ($1.3 billion) in deposits sparked a 30 percent crash in its shares on Thursday, before denials of an exodus.

BORROWING COSTS
On the streets of Madrid, there are no signs of panic about savings, but some are wary and are checking with branch managers and friends and relatives to discuss their concerns.

"The banks in Spain aren't in a good position to secure deposits and the accounts of Spaniards, and our government should have known that and taken the necessary measures so that this (the uncertainty over the banks) wouldn´t happen," said Manuel, a Madrid resident who didn't give his last name.

Prime Minister Mariano Rajoy will press for the European Central Bank to step up its defence of the euro zone in a meeting on Sunday with German Chancellor Angela Merkel, on the sidelines of a NATO summit in Chicago, and at a lunch with French President Francois Hollande on Wednesday in Paris.

Spanish officials say Spain has done its job with reforms to make its economy more competitive, such as making it cheaper for companies to hire and fire, with measures to shore up the banking system, and with harsh spending cuts.

They say ECB bond buying is necessary to back up Spain's efforts. Rajoy has pledged to continue with austerity measures even though they have aggravated the economic contraction.

There is skepticism the government's estimates of losses are high enough, so the auditors will first stress-test the sector and then look at each bank individually.

The government has also hired Goldman Sachs to carry out an independent valuation of Bankia, the ailing bank taken over by the state last week, two sources said, one from the government, one from the financial sector.

Moody's on Thursday downgraded 16 Spanish banks, citing the recession, real estate crisis and unemployment, and the government's reduced ability to support troubled lenders. But the move had been expected and Spanish bank shares rose on Friday to trim losses at the end of a grim week.

By 0940 GMT shares in Santander were up 2 percent and BBVA added 3 percent, outperforming a 0.4 percent fall in the European bank sector.

Bankia shares jumped 18 percent, but have still tumbled 31 percent in the last two weeks. Santander and BBVA have both dropped 7 percent this week as the crisis has rattled investors in the bigger, stronger lenders too.

The cost of insuring the banks against default has also risen. By 1000 GMT Santander's five-year credit default swaps (CDS) were up 9 basis points at 452.25 bp and BBVA rose 12.5 bp to 499 bp. This means it costs just under $500,000 annually to buy $10 million of protection against a BBVA default using a five-year CDS contract.

Insurance costs have risen across the sector this week, with the iTraxx Senior Financial index breaching 300 bp on Thursday for the first time since December.

Bankia - due to present a restructuring plan next week - has said it would need 4.7 billion euros in capital to comply with the last banking reform.

The government last week forecast banks would need to find about 35 billion euros more to cover potential losses, marking its fourth attempt to deal with a 2008 property market crash.