D’BANJ AND KANYE WEST TO STAR IN A MOVIE 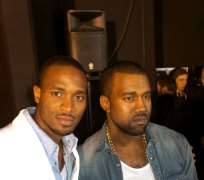 The movie is still untitled but we heard a name is coming out soon for the flick.

The new flick we hear was shot in far away Qatar in the middle East,and we hear is a hard core thriller that saw both musicians playing the roles of bandits in their debut movie careers.

This new development to most people buttress the growing bond and relationship between Kanye and D'Banj,as both artistes have been in the news lately.

While D'Banj has been the centre of media blitzs and attention owing to his break up with his co-label owner Don Jazzy over the ownership of Mo'Hits and other sundry issues,Kanye West on his part has been painting the cities of United States with his latest relationship with Tv Reality Show star Kim Kardashin.