9 Shamed Politicians Who Should Have Been Background Checked 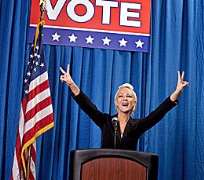 It's amazing what some politicians think they can get away with. With constant exposure to the public eye, political figures need to be extremely careful about how they live their lives, and yet so many of them wind up with criminal charges for offences raked up in or out of office. Others simply have seedy pasts that warranted closer examination prior to their induction as a political figure. The following nine politicians are worthy of a background check. Political scandals may have been avoided if the public subjected these politicos to closer scrutiny.

Kwame Kilpatrick
Former Detroit Mayor Kwame Kilpatrick was charged with a slew of offences, including conspiracy to commit obstruction of justice, obstruction of justice, two counts of misconduct in office and four counts of perjury. He used tax money to fund personal items, including parties held at his own house. To make matters worse, he and former Detroit Chief of Staff Christine Beatty lied in court, as proven by a string of text messages that also indicated a long-standing affair between the two. He was sentenced to four months in jail for his scandal. He has since been in and out of prison for parole violations. His latest trial is set for September of this year and could cost him an additional 30 years in prison.

Fred Richmond
Fred Richmond has a lengthy list of political achievements. He was deputy finance chairman of the Democratic National Committee from 1958 until 1960, a delegate to the 1964 Democratic National Convention, member of the New York City Council from 1973 until 1974, and elected to Congress in 1974 in which he represented New York's 14th congressional district from 1975 until 1982. Amidst his political workings he was arrested for soliciting sex from an underage boy followed by an undercover police officer, in 1978. While some may see this crime as a viable red flag, he avoided serving time for his crimes by agreeing to the far less severe punishment of counseling, and was shockingly returned to Congress soon thereafter. Yet, in 1982 Richmond was convicted for possession of marijuana and payment of an illegal gratuity to a Brooklyn Navy Yard employee on federal corruption charges. He also plead guilty to tax evasion. This forced him to resign from office.

Derrick Smith
Derrick Smith has only represented the 10th District for the Illinois House of Representatives since 2011, and he's already been involved in a scandal. On March 13, 2012 Smith was caught on an FBI recording accepting a bribery of $7,000. The bribe was accepted in exchange for writing a letter in support of a bid for a $50,000 state grant to a “daycare owner,” when in fact, one of Smith's campaign workers served as an informant for the FBI, and the daycare itself was a fictitious ploy to catch Smith in the act. It was the informant's recording that landed Smith in this sticky situation, and apparently Smith had been making comments to the informant admitting to accepting money for fundraising in exchange for various favors since the start of his campaign. The consequences of Smith's actions are harsh. If he is convicted, he could serve up to 10 years in prison and have to pay a $250,000 fine. In spite of the allegations, Smith has quite a devoted following of people who are convinced that he isn't guilty.

Barney Frank
In 1985, the then-closeted Barney Frank hired male prostitute Steve Gobie for his services. Frank provided Gobie with housing, but also saw fit to use his congressional position to fix 33 of Gobie's parking tickets. To slap him on the wrist, The House voted 408–18, but he was nonetheless re-elected in 2007 with a significant margin of votes. Frank “fired” Gobie after he realized that Gobie was running his prostitution service out of Frank's home. In truth, it was Frank's affiliation with Gobie that raised the public's brow more than any petty crime associated with him. Gobie himself has felony convictions for possession of cocaine, sodomy, and production of obscene items involving an underage person.

Ted Klaudt
Ted Klaudt, former State Representative for South Dakota, faced charges for rape, sexual exploitation of a minor, witness tampering, stalking, and sexual contact with a minor under 16, for which he is currently serving 44 years in prison. Three of the girls were his own foster children and legislative pages. Klaudt conned the girls into believing they would earn as much as $20,000 by selling their eggs to fertility clinics, and that he needed to perform various tests on them to ensure they were suited for the egg donations. He performed these painful tests on the girls himself. Klaudt co-sponsored various bills while in office that dealt with sex offenders, including a bill that required South Dakota to be included in the National Sex Offender Registry. He also proposed a bill that would make the distribution of birth control to high school students illegal. While he was touting his repressed, conservative views, he was subjecting young girls to rape and abuse in his own house. A thorough background check may have saved the girls from neglect and exposed Klaudt for his perverse interests. Shortly after his sentencing, Klaudt wrote a letter to Obama threatening to renounce his citizenship to the United States in an effort to free himself from his prison sentence.

Dan White
Dan White was elected to the San Francisco Board of Supervisors in 1977 on a conservative platform. A year later, he resigned with the addendum that his salary was not sufficient. Police supporters convinced him to change his mind, and in a state of regret, he asked the current Mayor George Moscone if he could retract his decision. He was declined. In a matter of days, White shot and killed the mayor and his Supervisor, Harvey Milk. White's reasoning was clear — he wanted to stop what he perceived to be growing acceptance of homosexuality in his city. He served just over five years in prison for his crimes. On October 21, 1985, White committed suicide via carbon monoxide poisoning in his garage. His lawyer, Douglas R. Schmidt, described White as a “troubled man”. Perhaps ample background checks would have uncovered White's troubled tendencies, preventing the deaths of Milk and Moscone.

William Jefferson
Former Democratic congressman William Jefferson represented the New Orleans-based 2nd Congressional District for nine terms before the FBI discovered an incriminating $90,000 of bribery money in his freezer while raiding his home in 2005. The money was meant to be sent to the Vice President of Nigeria at the time, Atiku Abubakar. The informant, Lori Mody, had been taping conversations with Jefferson and he was ultimately convicted of 11 of his 16 charges, including conspiracy to solicit bribes, solicitation of bribes, money laundering, racketeering, and depriving citizens of honest services.

Eliot Spitzer
Eliot Spitzer served as the New York State Attorney General, and later as 54th Governor of New York from January 2007 until his resignation on March 17, 2008. His resignation was prompted by a scandal in which he began wiring money to fund his expensive prostitution habit. Initially, federal officials suspected Spitzer of engaging in bribery because of the money transfers, but on further investigation, they found that he was making payments to a prostitution ring called the Emperor's Club. Spitzer reportedly paid around $80,000 for prostitutes, and his involvement with the ring extends back to his time spent as Attorney General. On March 17, 2008, Spitzer resigned, without much choice. He faced no federal charges for his involvement, but he certainly couldn't revive much of a career as a politician.