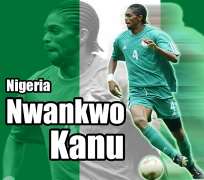 Former Super Eagles captain, Nwankwo Kanu has tasked Nigerians to strive to honour their heroes when they are still alive instead of crying 'out their eyes' and making eulogies at their death.

Nwankwo who said he was still in shock over the death of former Nigeria international, Rashidi Yekini. asked, “where was everybody when the man needed help?

Those who gave everything in the service of their country must be accorded the desired attention at all times. Yekini suffered and died like an orphan. Today, everybody is lamenting over his death. Nobody cared for him while he was alive and suffering,”

Kanu who has been chosen by the International Olympic Committee as one of the 2012 Olympic torch bearers in London said he was sad at the death of Yekini whom he said was their source of inspiration as young players in the national team.

“Although one does not pray for such things to happen. The question is, today it is Yekini, who'll be next?” Mr Spokesman or Spokesperson.