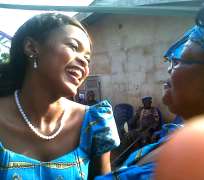 The burial rites starts with a Mass at the Orji's residence by 10am. Thereafter, his body leaves Annuciation Hospital mortuary, Enugu to his home town in Anambra.

His body was accompanied by his only daughter, Collette as the tradition demands. He is survived by one wife and six children.

Enjoy some of the photos from the funeral