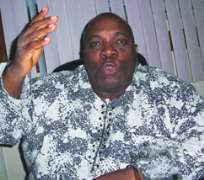 Okupe
As the clock ticks toward expiration of the two-week ultimatum to the Federal Government by the Save Nigeria Group (SNG) over the fuel subsidy scam, indications have emerged that the nation's economy may be grounded again.

Recall that in January all activities in the country were brought to a halt, following the removal of oil subsidy by the Federal Government.

A key member of the SNG, Yinka Odumakin, who spoke with Sunday Sun on the ultimatum, has cautioned that the Federal Government should not take the impending protest as an empty threat, as the civil society group is poised to ground all activities if the Farouk Lawan subsidy report is not expeditiously implemented.

But Chief Olusegun Obasanjo's former Special Adviser on Media and Publicity, Dr Doyin Okupe, described the ultimatum by the SNG as an extension of the political agenda of the Congress for Progressive Change (CPC), which Odumakin is its spokesperson.

Odumakin said Nigerians have had enough of corrupt practices by public officers, insisting that the masses would not allow the Federal Government to sweep the fuel subsidy probe report under the carpet as in previous cases. He revealed that preparations to make good their threat are in top gear, saying the mass protest would take a multi-pronged approach, including rallies, seminars, among others.

The human rights activist said the protest is going to be a sustained effort by the SNG to make the Federal Government do the right thing.'It is time for Nigerians to take over their country. Nigerians should take their destiny in their hands. If we do not address corruption in this country now, it would soon consume all of us. We would occupy Nigeria gain if they try to sweep the subsidy report under the carpet.'But it is not impossible that those who want to scuttle the probe report by the House of Representatives want Nigeria to be grounded,' he said.

On Monday, Nobel Laureate, Prof. Wole Soyinka, had urged Nigerians to be ready for another determined protest over the report of the fuel subsidy probe submitted to the House of Representatives by the Farouk Lawan-led Committee.

Soyinka handed down the threat at a press conference organised by the SNG in Lagos.. But Okupe described the move by the SNG to organize a mass protest as merely the political agenda of the CPC still grieving over its loss of the last presidential election.

He regretted that the SNG had derailed from the original ideals of its formation and cautioned that any protest over the subsidy report would be unacceptable to Nigerians as the document has not yet been submitted to the presidency.

The medical doctor-turned politician lamented that the civil society group has suddenly metamorphosed into an arm of the CPC, one of the main opposition parties in the country. 'Recall that Pastor Tunde Bakare contested the last general election as Vice Presidential candidate of the CPC. Recall that Yinka Odumakin is also the spokesman of the CPC. Both Odumakin and his wife, who are all part of the arrangement, attend Bakare's church.

'There is no difference between the SNG and the CPC. The mass protest threat is an extension of the political agenda of the CPC,' he said. He insisted that there is really no justification in instigating Nigerians for a mass protest over a report that has not yet been submitted to the President, saying the people would not be deceived by people who obviously have their own political agenda. Controversy continues to trail report of the fuel subsidy probe, which was submitted to the House of Representatives by the Farouk Lawan-led Committee.

Earlier in a written text of their stand on the issue, SNG Convener, Pastor Tunde Bakare, queried how Nigeria spent N3 trillion in 2011 above the N245 billion budgeted for subsidy the same year as revealed by the probe.

Bakare commended the House of Representatives for its consideration and adoption of the subsidy probe report in a record time of two days.