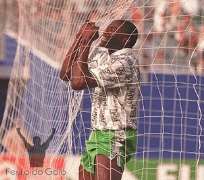 It was a Shocking News. Rashidi Yekini, One of the Finest Footballers Nigeria has ever Produced is Dead! He dies today in Ira Offa, Kwara State. Some Few Months Back, March 8, 2011 to be Precise, News Hit the street that Mr Rashidi Yekini Walks The Streets of Ibadan Barefooted.. A Legend going through such Suffering. What is our Government Looking at?

Kaduna born Rashidi Yekini is widely regarded as one of Nigerias greatest ever strikers. He started his career in Nigeria for UNTL Kaduna and Shooting Stars before heading to Cote d'Ivoire to play for Africa Sports National. He performed well for the Nigerian and Cote d'Ivoire outfits but did not make a name for himself in Africa. Instead, he opted to travel to Portugal, which turned out to be the wisest move of his career.

Within four years between 1990 and 1994 he scored 90 goals in 108 appearances for Vitoria Setubal! His performances earned him 'African Player of the Year' in 1993, after scoring 34 goals in 32 matches. He also became the Portugese first divisions top goal scorer (1993-4). As the first Nigerian to win the African Player of the Year he must be highly placed in this list of Nigerian greats.

He incidentally scored 37 goals in 70 appearances for the Super Eagles, another fine goal scoring record at international level. He featured in both the 1994/1998 World Cup and also attended the 1988 Seoul Olympics. Yekini is credited for scoring Nigeria's first ever goal in a World Cup competition, the Super Eagles defeated Bulgaria 3-0 in the same match at the 1994 finals. He was also part of the 1994 African Cup of Nations side that won the coveted tournament, his goal scoring tally was the finest in the entire Cup competition.

Later on in his career he returned to play for both Africa Sports and Vitoria Setubal, he was also signed to FC Zurich (14 goals in 28 app's) and Sporting Gijon (3 goals in 14 app's) to name but a few clubs. To complete his career he played alongside former teammate Mobi Oparaku at Gateway FC.