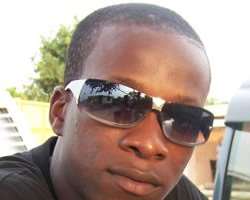 Born Kaakyire Kwame Fosu on February 14, 1981 to Mr. Samuel Kwamena and Madam Akua Addotei, K.K has been on war path with life since he could spell his name. His only passion music; was what helped him through most of the trying times.

K.K. Fosu has always been artistic, he was a member of his junior school choir as well as in the Drama group where he was group's comedian. Due to circumstances over which he had no control, K.K. could not make it beyond basic education so he decided to move to the capital to seek his fortune or talent.

In Accra, K.K. Fosu revealed a different nature of his artistic self when he took to barbering for a living. While in search of his daily bread, he kept an eye for his true love: music, so when the opportunity came knocking, he was waiting to join the Soundz Unlimited Jazz Band. That turned out to be the spring board that the youth needed to launch his career in the music recording industry.

He began first by featuring on the works of established artistes Papa Shot, Mr. Borax, Obrafour, Nkasei, Deeba, Obuor, Reggie Rockstone and many others which was a good start for him. His Manager Charles Lawson was right there to to give him the needed push when he introduced him to Mr. Richard Holbrock of Lowdown Records who in in turn produced his debut, Adwen.

His song Adwen featuring the popular line, Suu dwe suu dwe. He teamed up with two other musicians, Batman and Kokovelli on his album which features songs like Yaapiisi, Lyno, Twa Wa Ni and Sori among others.

His songs bear a resemblance to highlife giants like Kojo Antwi, Daddy Lumba and Daasebre Gyamena. K.K. looks up to these experienced highlife musicians for inspiration.

Even though K.K. was unable to complete his secondary education, he has not left his education there. He is making plans to go back to music school.” Music is my life and I plan on taking it very far even if it means learning everything that there is to know about it.” In the near future he wants to take Ghanaian Music to the international level and every one is going to realize what dynamite that he is.