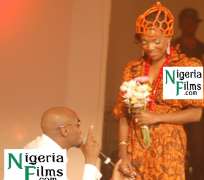 Serial babydaddy Tuface idibia has married Annie macualay his girlfriend of ''a decade and two years'' in a private cermony witnessed by only family members!

The introduction and brideprice ceremonies were done on tuedsay may 2,2012 at annies mothers house in ajah a day after tuface held his show which saw parents of both lovers walking the red carpet to watch their son/inlaw perform.

it was a moment to behold when tuface pulled annie to the stage and sang for her 'african queen'on bended knees.

The Private Registry wedding held on wednesday May 2,2012 and the details are still unfolding.

Annie after years of being the off/on lover to the africanqueen crooner, has become what most women only dream of....Mrs Tuface idibia...officially as at yesterday may 2,2012

.....So thats it ladies,tuface is officially off the 'market'.....try next door!

Congratulations Mr and Mrs Idibia,I hope i get an invite to the white wedding ooooh!