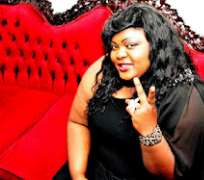 When you compare the size between Eniola Badmus popularly known as 'Gbogbo Big Girlz in Omo Ghetto and teenage singer, Davido, the result is an obvious one.

As at the time of writing this story, both Eniola Badmus of BlackBerry Babes movie fame and Davido of Dami Duro hit single are currently in Canada.

Davido arrived Canada just few days ago while Eniola has spent more than one week in Canada.

Sources told Nollywoodgists.com that Eniola has been on the look out for Davido asking when he would storm Canada for them to see each other.

Just hours ago, Eniola has been tracking Davido on twitter to get his exact location.

On of her tweets to Davido reads, "letz hook up on Islington on 401, Toronto." Another tweet reads, "what's up dearie, am waiting for you in Canada. When are you coming in?"

We hope what we were told about Eniola Badmus and Davido are false. Fingers crossed.