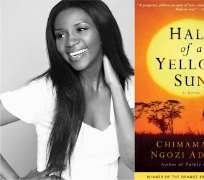 Genevieve Nnaji announced today that she has secured a role in the film adaptation of Chimamanda Ngozi Adichie's best selling Novel “Half of A Yellow Sun“. She revealed this through her publicists, VA-PR about this latest accomplishment.

Names one of Forbes “Most Powerful African Celebrities” joins the star-studded cast of Chiwetel Ejiofor, Anika Noni Rose and Thandie Newton in the highly anticipated movie. Genny will play the role of Ms Adebayo, another professor who develops a flirtatious relationship with her colleague Mr Odenigbo, played by Chiwetel Ejiofor.

The movie will be produced by Andrea Calderwood, the BAFTA winning producer of The Last King of Scotland and Gail Egan whose The Constant Gardener drew Oscar claim. Nigerian playwright Biyi Bandele, who has had a number of successful features on the London stage, including his adaptation of seminal post-colonial novel “Things Fall Apart” is making his directorial debut with this project.