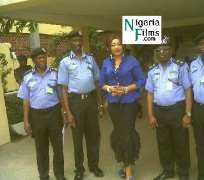 According to a source close to the actress, who hinted Nollywoodgists.com about the visit, Eucharia visited the police chief in view of her study for a Masters degree programme in Social Works, a course she is presently taking at the Lagos State University (LASU), Ojo campus, Lagos.

"You know she presently studying for her Masters degree programme at LASU in Social Works.

Her visit was purely academic. She will be doing a project on security for her Masters," the source told Nollywoodgists.com.

Eucharia enrolled for a Masters degree at LASU late last year. She was early this year officially ordained an Evangelist.

She became popular after acting in the movie, Glamour Girls.