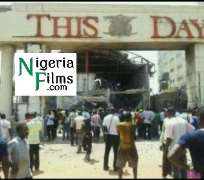 Reports just getting in now confirm that bomb explosions have hit the Abuja and Kaduna offices of This Day Newspaper.

The explosion occurred some minutes ago around Jabi motorpark, Abuja. Reports say about three people have been feared dead while five are injured.

We learnt that This Day newspaper in Abuja was targeted. One person was injured as a result of the blast and has been rushed to the hospital.

In a related development, This Day Kaduna office has also been bombed alongside two other media outfits.

Moment and The Sunday newspapers in Kaduna were also hit by the bomb blast.

No group has claimed responsibility of the blast yet but some are suspecting the dreaded Boko Haram group.

The Good the Bad and the Ugly at: AY's comedy concert on Easter Sunday