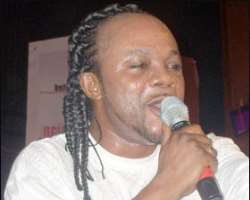 With 20 albums under his belt, Daddy Lumba's albums have yielded more number one and top ten hits than any other Ghanaian musician in our time. Coining so many phrases with his lyrics, Lumba has been responsible for some of the lingo used in everyday language.

Going to a social function without hearing at least one of his songs is like going to Chicago without seeing the Sears Tower silhouetting the skyline.

Born Charles Kojo Fosu, Daddy Lumba started his music career as one of the duo in the group Lumba Brothers, when he collaborated with his partner Nana Acheampong and released their first album entitled 'Yereye Aka Akwantuo Mu'. This song depicted the number of Ghanaian immigrants that originally leave the country to seek better fortunes abroad but make those temporary homes permanent due to financial, emotional or other unforeseen hardships. The album was produced by Lumba's wife.

After Lumba Brothers, Lumba's first solo album became an instant hit catapulting him straight into superstar status and making him a household name and a national treasure. Since then, he has averaged an album a year and has collaborated with other top musicians such as A. B. Crentsil, Selina, Felix Owusu, Yaw Micah, Borax and lately with Pat Thomas another iconic figure in the Ghanaian music industry.

On his first solo album, the song 'Theresa' quickly became a hit as he crooned about a lover and how no other woman is comparable. His delivery was unique, his style was impeccable. His ability to coin and mince ordinary sounding words and turning them into indecipherable incoherent phrases put his vocal technique unlike any other Ghanaian musician before him. His up tempo beats were undeniably high heat. On the title track 'Obi ato me so boo', the steady thumping drums and the consistent groovy bass line along with the sharp piercing lead guitar licks sent chills through one's spine.

On the song, his simultaneous craving and praising a new found lover while chiding and humiliating a former lover puts one in a bi-polar mood swing. However his uncanny ability to drag people along this sing-along melodic joy ride depending on whether you are praising a lover or dishing out insults to a former leave listeners to conjecture where they stand.

His second album 'Sika Asem' wasted no time in climbing up the charts thus squashing the 'sophomore syndrome', a situation whereby most musicians' second album fail to meet the standards or exceed their first ones. This album established him as a gifted musician who would be around for a long time.

Year after year he released one hit album after the another including, 'Ohia Asem', 'Playboy', 'Seese Wo Se', 'Odo Foforo', Biribi Gye Gye Wo' and 'Back for Good'. Then just like so many pop musicians before him had done, he found a new life in gospel music and released 'Mesom Jesus' and 'Woana Na Otene'. Praising and singing about Jesus had become a passion and he reached out to the many fans who had previously not listened to his secular music.

After taking some time off from the pop scene, Lumba reverted to the genre and released 'Aben Wo Ha' an album that took the country and his fans by storm. His finesse with words was up to the summit, his beat had become even more vibrant and the consistency of his tempo had precise and recognizable overtones of his familiar and unique style. The master had coined yet another phrase for the country.