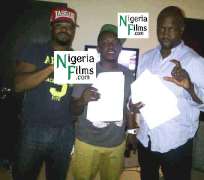 Following earlier reports that all was not well between Jude Abaga popularly call MI and his label boss, Audu Maikori, the rapper has now laid the rumour to rest.

This he did by signing a new deal with Chocolate City Record label.

The deal was made public by this afternoon after both parties put pen to paper for a new deal with the record label.

Just weeks ago, the rapper launched his own label, Loopy Music, which he claimed is a subsidiary oy Chocolate City.

Choc City, as the label is also called, has the rapper's younger brother, Jesse Jagz, Ice Prince, Brymo under it.