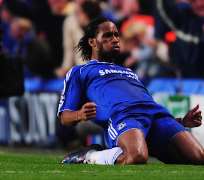 Didier Drogba scored the only goal of the match in injury time of the first half.

The match saw Lionel Messi continued his more than 500minutes without scoring against Chelsea.

With this result, Chelsea is close to being in Munich, Germany for the Champions League final for the second time in its history.

They were defeated at the 2008 finals in Moscow by Manchester United.

The return leg comes up on Tuesday next week at the Nou Camp, home of Barcelona.

Do you think Chelsea will qualify for UEFA finals at the expense of Barca?