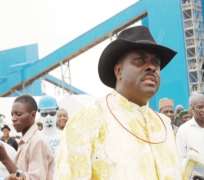 Ibori a few weeks ago pleaded guilty to 10 select charges bordering on money laundering and fraud citing mounting legal bills in what could have been a lengthy trial.

However, for opting to plead guilty and saving British taxpayers money, one source with knowledge of the sentencing told THEWILL Saturday that Judge Anthony Pitts will award Ibori 30 percent credit from the 15 year sentence which will reduce his term to 10 years and 6 months.

The judge would also likely approve another 6 months off the term after Ibori’s lead counsel, Mr. Nicholas Purnell, QC, would have given his mitigation speech.

That means Ibori will serve only five years according to prison calendar.

Then the 10 months spent in detention in Dubai, UAE will be credited as well as the 1 year already spent in a London detention facility, which leaves a jail term of only 3 years and 2 months.

Then there is an early release scheme for non-UK citizens that opt to go home early. If Ibori’s opts for this, that will knock off another 9 months.

According to the legal source, in all, Ibori will serve only 2 years and 4 months and will be eligible to return to Nigeria around mid 2014.

The Crown Prosecution Service and the MET Police have accused Ibori of laundering over $200 million of Delta State Government funds during his 8-year reign as governor of the oil rich state. The governor had repeatedly said he was innocent of the charges and blamed his political enemies for his woes until he dramatically entered a guilty plea a few weeks ago, thus bringing an end to a lengthy process to justice, which started as far back as 2003, when the British authorities opened investigations into his financial affairs with the help of Nigeria’s often discredited anti-corruption agency, the EFCC.

Recall that a Financial Advisor, Ghanaian born Elias Nimho Preko, who was charged alongside Ibori was acquitted on Friday after the jury found him not guilty on 3 counts bordering on money laundering and forgery, as exclusively reported by THEWILL.

The jury was however hung on 2 other charges bordering on money laundering.