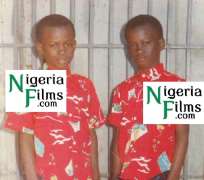 There is no doubt that one of the best and consistent music group in Nigeria is P-Square.

From there debut hit track, Senorita in early 2000 to their 2011 released album, The Invasion, they have remained on top of their game.

Many music groups in Nigeria have come and gone but they have lasted over a decade.

Some believe they have stayed together because they are twin brothers but one fact remains that they are two different individuals.

The picture above is when they were much younger.

What has really kept them together?