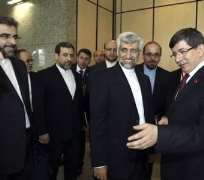 The talks, in Istanbul, the first between Iran and the six powers in 15 months, are unlikely to yield any major breakthrough but Western diplomats hope to see readiness from Tehran to start to discuss issues of substance.

That, they say, would mark a big change in Iran's attitude from the last meeting when it refused even to talk about its nuclear program and could be enough for scheduling a second round of talks next month, possibly in Baghdad.

Such an outcome could, at least for the time being, dampen speculation that Israel might launch military strikes on Iranian atomic sites to prevent its enemy from obtaining nuclear arms.

Both sides say they are ready at the meeting to work towards resolving the deepening dispute over the nuclear program which the West suspects is geared towards achieving a nuclear arms capability, but which Iran says has purely peaceful purposes.

"I hope what we will see today is the beginnings of a sustained process," said European Union foreign policy chief Catherine Ashton who is also the main representative of the United States, France, Russia, China, Germany and Britain at the talks.

Iran's chief nuclear negotiator told Ashton at a dinner on Friday he hoped the major powers would "win the Iranian nation's trust in this round of negotiations.

"Iran will enter negotiations with a constructive attitude and will insist on its rights," Iranian state television quoted him as saying.

"For their own reasons, each side wants to give diplomacy a chance at this point, to start a process rather than to force a quick fix," said analyst Michael Adler at the Woodrow Wilson International Center for Scholars.

Iran must show that it is willing to enter "serious engagement", one senior diplomat said, suggesting Saturday's discussions were unlikely to go into detailed issues.

"My tip is to set your sights low," the diplomat said. "It is not part of our game plan for tomorrow to lay out a long list of specific demands and conditions. They know what we think about all these things."

Iran says it will propose "new initiatives" in Istanbul, but it is unclear whether this means it is now prepared to discuss curbs to its uranium enrichment program.

"Iran is sending signals they want a serious and constructive meeting," another diplomat said.

The West accuses Iran of seeking to develop a nuclear weapons capability. Israel - believed to be the only Middle East state with an atomic arsenal - sees Iran's atomic plans as a threat to its existence. Iran has threatened to retaliate for any attack by closing a major oil shipping route.

COMPROMISE POSSIBLE?
Iran, one of the world's largest oil producers, says its nuclear program is a peaceful attempt to generate electricity and medical isotopes for cancer patients.

But its refusal to halt nuclear work which can have both civilian and military uses has been punished with intensifying U.S. and EU sanctions against its lifeblood oil exports.

"Given that oil revenue accounts for over half of government income, the budget will be under significant strain this year as oil exports fall as a result of sanctions and oil production is cut back by Iran as its pool of buyers begins to shrink," said Dubai-based independent analyst Mohammed Shakeel.

In a sign of what is at stake in the attempt to restart diplomacy, the fate of a new package of sanctions on Iran proposed by U.S. lawmakers may hinge on whether progress is made in Istanbul.

Western officials have made clear their immediate priority is to convince Tehran to cease the higher-grade uranium enrichment it began in 2010. It has since expanded that work, shortening the time it would need for any weapons "break-out".

Iran has signaled some flexibility over halting its enrichment to a fissile purity of 20 percent - compared with the 5 percent level required for nuclear power plants - but also suggests it is not ready to do so yet.

Iranian leaders would probably expect to be rewarded with an easing of sanctions if they agree to scale back their sensitive nuclear work, but Western officials say this is not an issue up for negotiation in Istanbul.

"Stopping 20 percent enrichment would be seen as a gesture to start negotiations, not to lift sanctions," one diplomat at the talks said.

In the end, experts and some diplomats say, both sides must compromise for any long-term deal to resolve the dispute: Iran could keep enriching uranium to low levels in return for accepting much more intrusive U.N. nuclear inspections.

"From a non-proliferation point of view, zero enrichment is beneficial, but not necessary to prevent a nuclear-armed Iran," Ali Vaez of the International Crisis Group thinktank said.