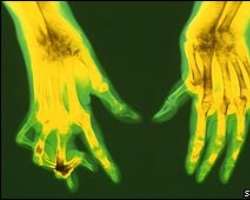 The condition attacks the joints
Listen to article

Female patients say they experience more symptoms like aches, pains and tiredness even when they appear to have the same level of disease as men.

The Finnish researchers believe their findings may be down to physical strength - women are naturally weaker than men and thus feel the strain more.

Details of their study of over 6,000 patients from 25 countries is published in Arthritis Research and Therapy.

It is already known that the disease is more common in women than in men - more than 70% of those with rheumatoid arthritis are female.

In the latest study, the men and women were asked to complete questionnaires about their disease and underwent x-rays and blood tests to gauge how advanced their arthritis was.

'Weaker' sex
Lead researcher Dr Tuulikki Sokka, a consultant in rheumatology at the Jyvaskyla Central Hospital, said: "The level of rheumatoid arthritis appears to be pretty much the same in both sexes but the symptoms of joint tenderness and things like that appear to be worse in women.

"The problem is that the only real measure we have for rheumatoid arthritis is the X-ray, which only measures damage.

"This is not a very valuable tool in the everyday clinic and so we need to rely on what patients tell us. We found that women tell us they have more severe symptoms."

Dr Sokka believes this relates to women being physically weaker than men.

"Our findings were particularly obvious in older women, who are losing their muscle mass little by little every year.

"Given that woman is the 'weaker vessel' concerning musculoskeletal size and strength and her baseline values are lower than men's, the same burden of a musculoskeletal disease may appear to be more harmful to a woman than to a man."

Macho façade
Alternatively, it may be that women feel less inhibited about admitting they are having difficulties, or that men tolerate more pain, she said.

Hormones may also play a role.
Professor Alan Silman, a spokesman for the Arthritis Research Campaign, said: "One of the most fascinating and unexplained aspects of rheumatoid arthritis is the strong female excess in incidence, although this narrows substantially after the menopause.

"This provides powerful evidence that hormonal factors are involved in the disease.

"Furthermore men who develop the disease need to have a stronger genetic background than women.

"Thus it is not surprising that the disease behaves differently between the genders and the differences in severity are not likely to be totally explained by external factors such as body build and physical activities."

Dr Chris Deighton, a consultant rheumatologist at Derbyshire Royal Infirmary, said it was possible that women had more severe joint disease than men.

But the study also showed that the way disease activity is measured in patients could differ between men and women.

Dr Deighton said: "My impression is that there's still a possibility that women have more severe joint disease than men do.

"When they looked at the data, they noted that women tended to have more erosions (of bone) than men did."