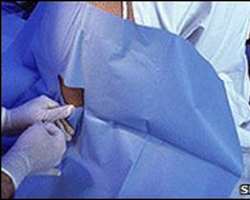 Epidurals are used during labour The risk of epidurals and spinal anaesthetics to expectant mothers and patients undergoing surgery may be being overstated, a study suggests. Researchers at Bath's Royal United Hospital analysed the complications from the 700,000 pain-killing injections given each year.

Experts said it was important patients were told about the true risk.

Both procedures are injections given into the small of the back which go between the vertebrae and into the coverings that surround the spinal cord.

A local anaesthetic is then administered to numb feeling in the lower abdomen.

They are commonly used during labour and for operations such as knee and hip replacements.

The difference between the two is that a spinal anaesthetic goes deeper and is therefore more effective as a pain relief.

The Bath team were given data from all the hospitals in the UK and found only between 14 and 30 patients were permanently harmed.

Researchers could not be exact because in some cases the cause of injury was not totally clear.

Of those injured, between five and 13 were paralysed and three to six died, the British Journal of Anaesthesia reported.

Most complications were judged to have been unavoidable - a result of an individual's reaction to the procedure rather than the way it was carried out.

Researchers said expectant mothers, in particular, should not be overly concerned as their risk of permanent harm was as low a one in 80,000.

Frail
Surgery patients are thought to have had higher complication rates because they tended to be older and more frail.

Dr Tim Cook, the lead researcher and a consultant anaesthetist at the hospital, said: "The results are reassuring for patients."

But he added doctors needed to make sure they did not become complacent in administering these complicated procedures.

Charlie McLaughlan, of the Royal College of Anaesthetists, said: "This is good news. We have not had reliable data on the risks before.

"I think patients have probably been under the impression that the risk was greater than it actually was and this could have put them off the procedures."