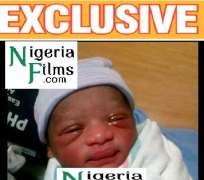 Less than 24 hours ago, Nollywoodgists.com broke the story that one of 2Face's babymamas, Pero Adeniyi had delivered a baby boy.

The news, which has spread wide on online media, has been doubted by some people in the industry, claiming it is a false story.

Nollywoodgists.com can exclusively show you picture of Pero's baby, which she gave birth to in Washington DC, United States of America.

We can also exclusively confirm that 2Face and Annie are presently in Nigeria, as they were spotted at the Nnamdi Akikwe International Airport, Abuja yesterday, just when they arrived from the United States.