SASHA PREGNANT OUT OF WEDLOCK 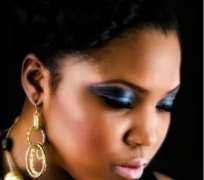 The first lady of rap music in Nigeria, Yetunde Alabi popularly known as Sasha, is heavy with her first child.

She was spotted at Shoprite in Ikeja,Lagos on Wednesday,March 21,2012 alongside her fiancé.

One glance at her revealed that she has added weight on strategic areas of her body with swollen face.

Clad in a flowery green and brown mini dress,the mullato guy that was with her was putting on a blue jeans and a white stripe shirt.

Sasha is aware of the rumours going round but has refused to make a statement-confirming or denying it.

But a close source confirmed the happy news to us.