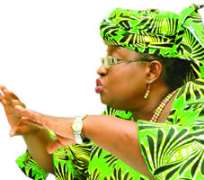 Iweala
'From the days of Ahasuerus to Charles de Gaulle' the king's Ear has always been the input center of political action. Over all the thousands of years of development among men toward civilization, two problems have permanently inter twined - first, how to bring the thinking of intelligent men to the place of power and next, how to enable power to impose a reasonable discipline on action.

In Kennedy's time, The King's Ear was held by men of leaning and study. Without him those thinkers would have gone their way. Bound to him, they established a new frame of American action in which his thrust and leadership gave purpose at his White House the dialogue with these thinkers, innovators was the atmosphere of political decisions'.

Theodore H. White, The making of The President, New York 1964. By mid-day the 22nd of November 1963, a bullet ripped off the brains of John F. Kennedy. That fatal aim from a lunatic, Lee Harvey Oswald ended the three year tenure of the 35th President of the United States.

The presidency was in those memorable three years, the center of action in John F. Kennedy's day and as the President and leader, he is best remembered for his deeds and personal decisions, but all these depended on another and often overlooked quality. His intuition, ability to find and direct and organize the talents of other men. As an executive his taste in men of extra ordinary talents was as fine as Franklin D. Roosevelt's. When he died, he left behind a team that was probably his greatest single gift to Lyndon Johnson.

His Secretary of Defence, Robert McNamara headed the pentagon, probably the ablest civilian team to direct the Department of Defence since its founding.

Robert McNamara, who later served, Lyndon Johnson after the death of Kennedy consolidated his golden service to his nation when he was nominated and elected President of the World Bank.

The World Bank, otherwise referred to as the IBRD, the International Bank for Reconstruction and Development and the equally formidable International Monetary Fund belong to the Bretton Woods Institutions.

While, the IMF Presidents are usually nominated by European nations, and deals more with fiscal policies, the World Bank is rather more liberal as to who occupies its top management and was a US initiative after the World War to give succor to the devastated European nations that saw war.

Over the years the bank provides socio-economic physical amenities and engages in building infrastructures across the globe. Since McNamara many of its conservative regulations have continued to be reviewed and that is why it is expedient for Nigeria and Africa to throw in everything on its most visible and very qualified candidate, Dr. Ngozi Okonjo - Iweala; mobilize and ensure she becomes the next Robert McNamara for the Bank and to the benefit of the country and the region nominating her.

Before now, a US presidential nomination is almost a shoo in for the job. Whatever must have instructed Obama's preference for an Asian American, should be counter-punched with a fresh presentation of our own nomination. A presidential plus south-south campaign delegation for Ngozi Okonji-Iweala for World Bank should take a flight right now and head not to Washington but to Chicago.

There the delegation would present the candidate to Reverend

Jesse Jackson. Then he would lead the delegation to Mama Africa Opral Winfry President Jonathan will then send the presidential plane to South Africa to pick up Bishop Tutu. Tutu would lead Jackson, Opral to the White House and Ngozi Okonji Iweala will become an issue in the black vote US November Presidential calculations.

Obama will have to chose Lee on account of the Asian vote or would then have to contend with whether to take the Black vote for granted or not.

Ngozi Okonjo Iweala for obvious reasons should not be platformed on the shallow hangers of her Nigerian antecedents, for obvious reasons. This is a world citizen, who is a scion of a philosopher King, Teacher, Historian, a Professor of Economics, Statistician, Historian, Botanist, Mathematician, Philosopher, Military Commander and the Chairman of Ghana's Educational Review Panel.

Apart from attending Nigeria's Premier University of Ibadan, she was in Oxford, Harvard and MIT.

As an insider she was the World Bank's Regional Director, Middle East, Vice President and is qualified to be President. If the run is well coordinated the Nigeria and Africa's promise may yet be attained from a texted alternative.

In that wise Africa would build the TraNs Africa Continental Road from Dakar to Nairobi.

Build two other dams across the Congo to ensure power for the basin, for the Camerouns and Nigeria, This time the head tying unfashionable new President would be pressured to build her father's pet dam across the Ogbe Ubur river, two extra Niger bridges. Significantly, as drafted by John Kennedy in the Civil Rights Act, 1963, her election supports the America civilization which promised in that draft that all men and women be granted equality of opportunity.