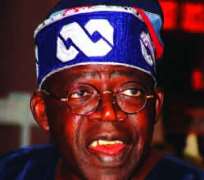 Elders of the Action Congress of Nigeria (ACN), in Lagos State have urged the former governor of the state, Asiwaju Bola Tinubu to go beyond local politics and aspire to be president of the country.

This was the consensus of the elders at a special luncheon yesterday in Lagos to celebrate his 60th birthday.

Speaking on behalf of other elders, Oba Olatunji Hamzat said: 'Going by the political antecedents, the country needs someone like him as president.' According to him, until Nigeria had someone like Tinubu as president, 'the country would continue to be in the mess we are in presently.

Hamzat regretted that 'those at the helm of affairs currently cannot do it,' saying, 'hence our clamour for achievers like Tinubu to be in the saddle.' He, therefore, assured Tinubu that 'any political war you wage, if you look back, you will see us behind you,' promising him to forever remain his loyal desciple.

He expressed gratitude to God that 'the seed he planted had germinated and bearing fruits,' asserting that 'we are all beneficiaries of the seed.' Present at the Golden Gate Restaurant, venue of the event were chiefs Olorunfunmi Bashorun, Biodun Ogunleye, Abiodun Sunmola, Mrs Sarah Sosan, Aremo Olusegun Osoba, Mrs Adejoke Orelope-Adefulire, Senator Oluremi Tinubu and Senator Tony Adefuye among others.

While responding, Tinubu, who described the day as the happiest in his life, attributed his successes and achievements to the party leaders and elders. According to him, all the accolades and encomiums from around the world were 'as a result of what you have made of me,' admitting that 'without you being there for me, I wouldn't have succeeded.'

On the presidency project, Tinubu promised to be committed to it and work harder to add value to the already achieved succeses.'