'I FOUND LOVE IN NIGERIA' 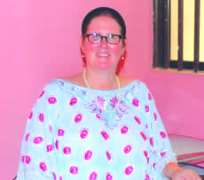 Love they say knows no boundary, that is the story of a Swedish lady who dared all the bad press about Nigeria and came in the name of love sometime in 2006. Her name is Obidiya Sandra Onuorah, a name she got when she mingled so well with her new family that her husband gave her that name which meant that she is so dear to her husband. Married to an Anambra man, Obidiya went down memory lane recalling every minute of the experiences she acquired in the process of being initiated into the Igbo culture and tradition.

Now in Nigeria as a quality assurance administrator for schools, Obidiya in a chat with Saturday Sun, spoke about her pet project which she has established to help Nigerian women.

Who is Sandra Obidiya Onuorah?
I am a person who has much fate in God and in Jesus Christ as much as I can. I am a person committed to the development of Nigeria. I grew up in Norway. My father was a fisherman in his time. He was also a successful Sales Manager with Kodiac, a photographic film producing industry and very skillful with Mathematics, and he handles accounts very well. My mother was a housewife when I was growing up and also a school psychologist. She taught children who have special problems and she also became a school psychologist when I was in my 20s. When I was 20, I immigrated to Sweden where I met a Greek guy, fell in love and had a son for him. My son is now 40 years old. The likelihood of becoming a grandmother through him is very slim. He is diabetic and does not want to pass that gene to anyone. He is the only son I have and I have to be glad while he is alive. Maybe in this country I will find a grandchild even if it is a teenager. Before I relocated to Sweden, I went to a secretarial school and became a secretary in US. I also did a secretarial job for some months in Sweden while in school. After my graduation, I became a Computer Science teacher till few years ago when I retired from active service.

What brought you to Nigeria?
It was love and my passion to establish an NGO in Nigeria. It all started in Sweden when I fell in love with a Nigerian and it was very important that I had to come and know where he comes from. I was very afraid initially, because based on the stories that I have heard about Nigeria, I did not know if I would withstand it. Such stories included epileptic power supply; lack of clean water, very bad roads and above all that Nigerians are cannibals. I felt nervous.

What made you change your mind?
I had contacted Nigeria for several years. I was curious to know more about this place that I have heard so much about. So far, my experience in Nigeria is quite different from all I heard about it. Everything to some extent is true. There has been bad government, no light and mosquitoes everywhere. The people, the food, the music, the way they worship God, which was not part of the information, I heard about Nigeria. I blame the media and Nigerians themselves for the bad press.

You already have an Igbo name, how did it come about?

It is an ethic name, which means the heart of the husband. My husband gave me that name because of the way I carried myself throughout my stay in Anambra. Everybody loved me and my husband was so impressed that he called me Obidiya. The reason I got that name was that when I was traditionally getting married, I was somehow adopted into one family- an extended family. This family is made up of in-laws; they are not particularly blood relations.

Can you recall the moments at the traditional wedding day?

Too bad, I don't have a video that was actually made. I had a green native wedding dress, a necklace and earrings to match. What happened was that there were lots of food and drinks prepared for the guests. The event started in the afternoon, at about four or three o'clock. It began with some kind of blessing of kola nut. One of the guests asked for blessing upon the community, and another for the couple. Although I did not understand the meaning of each word, I do remember that at the end of each prayer, they ed Iseeee.

After the blessing, I was supposed to go around and dance like I am searching for my husband with the palm wine, which I did very well. When I was done looking for my husband and found him, I was asked to kneel down and drink from the palm wine glass and give him to drink, which I did. That was the end of the wedding, which symbolizes the unification of the couple. It was fun and then came the music and dancing and they were spraying us with money. Much later after the event, the women in the community came to the family house dancing, I was told that it was a formal way of welcoming me into the married wives group. I danced with them and it was a lot of fun. I discovered that most of the men in that community have so much wives and they all live together.

If your husband wants to marry another wife, will you allow it?

I can't stop him because it is his culture. In this country, it can be allowed but in Sweden without a divorce, it is a crime.

Did they ask you to cook for your husband and his people as required by some Igbo communities?

No I did not have to cook. I entered the kitchen and asked to help but they asked me to leave. It is a hard job to make food for so many people but I did help my real mother- in-law. It was more like a shock to her; she found it difficult to believe that a white lady could enter a kitchen full of smoke. We communicated mostly by gestures because she could barely understand English. I had to chop vegetables, pound crayfish and things like that and she liked it a lot. At first my husband wanted to take me to a hotel. His reasons were that life in village is very rough and that they have a pit toilet. He also warned me that there is little or no protection against mosquitoes. I said no, this is your family and I need to stay with your mother. That especially made my mother in-law to feel good. She also gave me a live foul as a wedding gift, this was a beautiful experience.

You said that one of the things that endeared you to Nigeria is a project, what is it about?

My project is about empowering women through micro finance programme. The idea of having a co-operative is a little unusual for Nigerians. It should not be abnormal and once people get involved, it gives them something instead of everyman to himself. The hard issue is that people find it difficult to trust one another, so it is something that has to be done carefully. If they want to expand their shop in any way, they would need more money and no bank will offer them that. We are missing opportunities to help business grow. Especially business run by women who have irresponsible husbands, or their husbands left them to live with another woman. I have seen many cases where a woman is the breadwinner of the family and no one is giving them a major hand. I know of a woman who has a shop about the size of a door and has run the shop for 18 years. She is not the only one. The truth remains that Nigerians have many possibilities for growth. It is not hard to build solar batteries when we have the sun at our disposal. This is what I call thinking the wrong way. There are so many natural resources, for instance, the coconut, which can produce coconut oil, coconut perfume. It falls from the tree and we eat and most of the time discards it. What about tourism, there are so many places that are breathtaking. So far, I have made a lot of progress and would soon kick off.

How can you assess the Nigerian educational system as a quality assurance administrator?

Many people have collected incorrect teaching from nursery to tertiary level. The teachers who taught the teachers are not skilled enough to give the quality that is necessary. When you read what teachers are writing in English, you will ask them to get remedial in English. And that is someone who has gone to the university. Schools should also insist on a checklist to ensure that the students have got what they really need to scale through. A young lady I met recently was shocked when I told her that she needs help in English. I am talking about a well-educated girl from a family that has money to give her the best. In order to get it right, the individual should be aware that there is need to change or enhance their performance. The awareness comes with the willingness to fight to change.