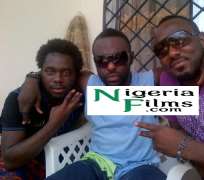 Nollywood actor, Jim Iyke has joined the league of actors who have tried hands in behind the scene business of the film industry.

Nollywoodgists.com learnt that Jim Iyke, who had some cuts on his fingers after being mobbed by some fans in Cameroon some weeks ago, is actually in that country to shoot his movie.

Jim Iyke, who also pleaded an out-of-court settlement of an alleged N15m fraud some weeks ago, has his new movie with a working title, Blood and Wine.

Here are some of the pictures already released from the movie set.