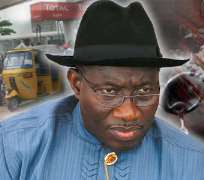 There has been clamor from various concerned and patriotic sources that the few privileged Nigerians who cornered over I trillion naira($7billion dollars) belonging to the Nigerian people in the name of subsidy be brought to book. There is equally hope that the ongoing probe of fraud in the pensions industry, financial securities industry and other malicious avenues of siphoning state resources be brought to book. I am part of those hoping that a transformational miracle will occur that will bring them to book. This is illogical optimism, based, not on precedence, but on wishful thinking. There are many reasons President Goodluck Jonathan cannot prosecute subsidy and other thieves.

The first reason is situated in the personality of the man Goodluck Jonathan. President Goodluck does not do anything unless he is pushed to do so. He was literarily convinced to assume the post of Acting Governor when Alamaeseigha was having problems with the Metropolitan Police. During the Yaradua Presidency illness saga, he was pushed to assume the constitutional position of Acting President. President Goodluck initially set out to reform the PDP, using the then national chairman, Okwesilieze Nwodo, but when the state governor under PDP kicked against it , he jettisoned the idea . Even in the case of the fleeing former Governor Sylva of Bayelsa State, the people behind the political suffocation of Sylva led by King Turner , had to tail President Goodluck until he finished the Sylva demolition project. The push for the subsidy, pension, securities commission and other thieves to be prosecuted is still weak and cannot yet move this Goodluck. This is situated in the fact that from the time of Farida Waziri the graft commission have been a front office department of the presidency and can only prosecute when the presidency gives clearance. This clearance is likely not to come from this Goodluck.

The second reason the subsidy thieves cannot be prosecuted is that part of the proceeds from these thievery went into prosecuting the 2011 presidential elections. Oil magnets, political associates, contractors and others where used to bring out huge sums for the project and when the presidential project was done with, they refused to surrender the pot from where they were drinking the oil. Therefore to ask President Goodluck to prosecute those who mobilized state resources to help him during elections and deliver him from what would have been a Buhari- Tinubu alliance or an unpredictable runoff election is a wishful thinking.

The third reason is that if these oil thieves goes down they will drag the ruling party with them because they will expose the beneficiaries of all the fraud in the system, therefore the Nigerian government will do everything to frustrate the prosecution.

During the regime of Yaradua , and as immaterialist as the late president, he found it difficult to surrender the former Governor of Delta State to the graft commission for prosecution. This is because the former governor sponsored a substantial part of the late president’s election. When the Metriopolitan police decided to try Ibori for money laundering in 1998, the late president sent the Attorney General of the whole Nigeria, giant of Africa to ask the London police to hands off the matter. The attorney General wrote the Metropolitan Police that Nigerian money is not missing n that Ibori has no case to answer.

During the era of General Abdulsalami Abubakar and after the death of MKO Abiola , Babangida preferred Olusegun Obasanjo to Olu Falae as president despite the fact that Olu Falae served him both as Secretary to the Federal Government and later as Minister of Finance. This is because Babangida believes that an Obasanjo presidency would likely shield him from prosecution as a reward for helping him ascend the Nigerian throne ,while Falae, already the choice of the progressives, would likely be adamant. Obasanjo rewarded the Babangida assistance by ensuring that the Dr Pius Okigbo report on the mismanagement of the gulf oil windfall was not implemented, and when the heat became too much , they connived to remove the document from every public record.

During the 2003 presidential election especially after the parliamentary elections, there was a rapport between Dim Odumegwu Ojukwu and Muhammadu Buhari that in the event of a runoff election, APGA and ANPP will form an alliance. Ojukwu demanded an end to the incessant killings of Igbos,and infrastructural development of the South East as conditions for supporting Buhari. Obasanjo got wind of the alliance and turned the rest of the election into a shameful allocation of votes to ensure the runoff never was. In 2007 the northern elites demanded immunity from prosecution before they can support Buhari as president. In 2011 the northern mediators wanted immunity from prosecution and the ACN wanted the Vice Presidential slot which was suspected they wanted to hand over to Tinubu. While Buhari accepted the then conditions of Odumegwu Ojukwu without hesitation, he rejected that of the northern elders and the ACN so that he will have the freedom to act according to his conscience. A lot of people called him rigid, uncompromising and a bad business man. Now we have a dynamic, flexible, smiling and good business savvy President and we are complaining about the results of compromise.

The best we can get from these probes is information, and this information will be handy in the days of revolution, or social unrest or even war. The information and the shock of the disclosures of fraud is being stored in the subconscious of Nigerians and will be handy at the appropriate time. The other gain is that the recent probes have made the next set of looters to be a bit careful. That bit of carefulness on their part can translate to lots of billions of dollars in saved funds hitherto opened for embezzlement. Those making noise that President Goodluck should prosecute the thieves would be disappointed at the crash of their optimism.