Nigerian Leader Calls For Peaceful Use Of Nuclear Energy 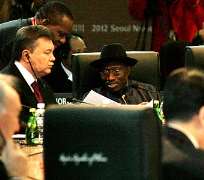 In an interview with Yonhap News Agency, Jonathan also asked for South Korean businesses to expand their investments in building Nigeria's infrastructure for the energy and telecommunication sectors, in particular.

The president arrived in Seoul Sunday to attend the two-day summit, where representatives from 52 other nations and four international organizations have joined to mainly discuss preventing terrorists from getting hold of nuclear weapons and ensuring atomic safety.

"As the country that has technology to use the nuclear power in so many ways, it's (South Korea's) efforts to draw vision for the peaceful use of nuclear energy is good," Jonathan said in the interview held in Seoul on Monday. "(The summit) is quite significant."

He added that the essence of the summit is to discourage countries not to use nuclear weapons and make sure that countries don't exploit nuclear energy in terrorist attacks.

On Wednesday, Jonathan is scheduled to hold talks with South Korean President Lee Myung-bak in which he will discuss furthering economic cooperation to encourage more local companies to enter into the resource-rich country.

"Nigeria is a country with lots of natural resources. South Korea, on the other hand, is industrialized," he said. "So, if two countries commit together, they can really enhance."

As Africa's number No. 1 oil producing country, Nigeria has opened up its oil industry to foreign investors and continued efforts to explore its offshore oil fields and develop oil pipelines.

"We need a lot of investment in pipeline investment," he said. "It's the area for (South) Korean companies."

In terms of a recent string of terrorist attacks that have shaken Africa's most populous nation, President Jonathan re-assured foreign investors of safety.

"We have some parts of country we have terrorist attacks," the president said. "But it doesn't affect the whole country. We are in reasonable control."

Jonathan, who first came into office as vice president, assumed the role of acting president in early 2010 and was later thrust into the presidency following the death of his predecessor Umaru Yar'Adua. It is his first visit to South Korea.

The following are excerpts from Yonhap's interview with Jonathan.

Q: What is the significance of the second Nuclear Security Summit in Seoul?

A: Of course, South Korea's hosting the second one is very significant. It is one country that is using nuclear power in energy sector. Also, it has technology to use the nuclear power in so many ways. So, for them to draw vision for the peaceful use of nuclear energy is good. It shows that Asian countries are working. It (summit) is quite significant.

Q: What sort of achievements or breakthroughs do you expect at the nuclear summit?

A: Summit in principle is not just science forum. It's purely administrative. So we are not going to (discuss) technology and missile. But essence of the summit is discourage countries not to use nuclear weapons. Discourage them so they will never use. And make sure that the world is using peaceful use of the nuclear energy and not exploit them (for) attack (and) for destructions.

Q: What does Nigeria in particular want to accomplish in this summit?

A: We are also into nuclear technology. We also want to use nuclear power in agriculture. We need (nuclear power) centers for the use of nuclear energy. This summit helps you to (use) guidelines and law to control the use of transportations and nuclear power.

Q: You are scheduled to hold bilateral talks with South Korean President Lee Myung-bak on Wednesday. What do you expect from these talks?

Q: How would you view the level of cooperation between Nigeria and South Korea? How can ties between the two countries move further forward?

A: So far, relations are good. Nigeria is country with lots of natural resources. South Korea, on the other hand, is industrialized. So, if two countries commit together, they can really enhance. Nigeria is a major player in oil industry. We have a lot companies from oil industry, (involved in) explorations and exploitations. So, there are mines offshore and onshore.

Q: What areas would you want to further develop cooperation?

A: (South) Korean companies like Daewoo have been here (in Nigeria) for over 30 years. Different platforms such as oil mining and offshore mining. They are heavily involved in that area. In other general areas like general telecommunications, (companies) such as LG is involved. They have been doing very well. (South) Korea has developed from nothing. They have to commit. I believe any country that is committed to excellence and work hard, issues of corruptions are reduced. They also have to make sacrifices. Citizens must have to give sacrifice. If you are not into sacrifices, you cannot move forward. For any nation, nations with citizens (should be) ready to make sacrifices. I see Asian nations made a lot of sacrifices.

Q: Issues of political stability is important for foreign investors. In terms of recent attacks, what measures are being taken?

A: Thank you for this question. There is one key area that I want to emphasize. Nigeria is very, very green area for investors. Before this time, during the military rule, you don't know who is the next president. When the new government come, there is a new policy and those policies are not attractive to investors. Basically from 1999 to date, we have established democratic government. I am the president during the transition. Before I took, I was vice president. President was very ill and people thought there would be militaristic intervention. Today, we conducted election. Politically, we are stable. For investors, Nigeria has strong law and media. No president can just change law that can effect investors. Especially, we encourage investors.

In terms of security challenges, we have some parts of country we have terrorist attacks. But it doesn't affect the whole country. We are in reasonable control. We have belief that in middle of this year. In terms of security of individual, we will have control in the middle of this year. (The danger) is limited to some part of the country. It doesn't extend to other parts of country. Other areas and public sector have been opened up. Agriculture producing raw material, and (other) area sectors have been opened. Not just in private airlines but airports, terminal buildings in other sectors. Oil sector has been opened from the beginning. We have very few chemical companies. It's a area these companies can invest. Before, telecommunication was monopoly until 2002. Telecommunication has been opened up to other countries. More Korean companies can invest in all aspect.

Q: Which economic sector do you want to draw more investment?

A: I want investment in power sector. For now, we are quite low. We want (South) Korean investors.

Q: Recently, you have asked for an approval for a plan to borrow $7.9 billion for a pipeline project. Has there been any progress in the plan?

A: We need a lot of investment in pipeline investment. We have to convey parliament that huge investment is needed for hundreds of kilometers. It's the area for (South) Korean companies.