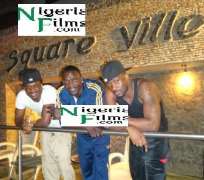 He was featured in Chop My Money remix, which is a track in their last album titled, Invasion.