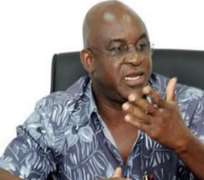 The Senate president, who made the lamentation in a keynote address he delivered during the Senate Committee on Sports Public Hearing at the National Assembly yesterday, noted that sports administrators should be held responsible for the decline because they abandoned talent hunts at the grassroots, thereby causing dearth of sports development at the local and state level.

Speaking from his versed knowledge in sports, Senator Mark said: 'As most of you, I'm genuinely worried about Nigerian sports. There was so much failure and we must go back to the fundamentals of the game.

'There was a time Nigerians don't accept bronze. We won medals ahead of some countries in the past, but today, we struggle not to come last at every sports meet.

'There is a lot of bickering in the football house. If only we are making progresses with the rancour, we would have accepted it. The administrators should hide their heads in shame for the failures.

'We have forgotten talent hunts from the grassroots. There were competitions all the time in the past to discover talents, but we hardly hear of such competitions at the local and state levels again,' he noted.

The former military governor of Niger State chided the sports administrators and specifically accused them of bias in the selection of sportsmen and women for competitions, stressing that there should no be federal character in the selection of players in the national team.

'There can be no federal character in the selection of sportsmen and women. It must be done purely on merit. If the entire team must come from the same family and give us good result, so be it. The interference must stop. We must evolve a robust policy to redirect the ship of Nigerian sports. We must stop sitting in our air conditioned offices, fighting each other at the expense of the game,' he charged.

The number three citizen urged the sports administrators to invest in the trainers, stressing that he does not care about the colour of the Super Eagles' coach or other sports coaches, but that the most important thing would be to hire someone who would deliver.

'We must invest in the trainers. For me, it does not matter where the coach comes from, a Nigerian or foreigner. In fact, if a woman can train the Super Eagles and lead them to victory, there is nothing wrong in hiring her.

'Sports are expensive and sportsmen are equally expensive. Brazil and Argentina are not better than Nigeria, but they have been able to distinguish themselves in the game of football.

'There can never be half measure to the funding of sports. It is either that we fund selected sports or we don't fund all. Countries like Kenya dominate the long distance races, nothing stops us from finding the sports we have stronghold on and work with them.

'We must examine the current statute used in running sports in the country and if there is anything we can do in terms of legislation to improve the running of the game in Nigeria, the parliament will gladly do it,' he assured.