POWER FROM THE WIND IN SOUTH AFRICA 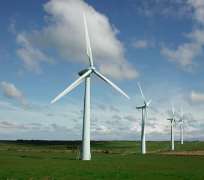 Three blades — each the length of a tennis court — revolve atop a wind energy tower reaching 50 metres into the sky, equal in height to a 17-storey building. There are four such turbines whirling in the hot, dry and windy landscape near the town of Darling in South Africa’s Western Cape, generating 7 gigawatt hours per year of green energy. This first commercial wind farm in South Africa, reflecting the collaborative efforts of international donors, government agencies and the private sector, shows that wind energy is feasible.

The development of the Darling Wind Farm, which was established in 2008, was fraught with obstacles. This was mainly because large-scale wind generation was new to South Africa and institutional arrangements were not yet in place to allow independent power producers to feed energy into the national grid.

What made the difference was that the then minister of mineral and energy affairs proposed the Darling Wind Farm as a national demonstration project in 2000. She also requested international assistance in developing wind energy from the Global Environment Facility, UN Development Programme (UNDP) and Danish International Development Agency.

That assistance led to the South African Wind Energy Programme (SAWEP), a project to reduce greenhouse gas emissions through the promotion of wind power. It facilitated creation of the Darling Wind Farm.

Private sector
“The significant thing to remember about the Darling Wind Farm is that it shows that wind energy can be done by the private sector,” says Andre Otto, the project manager of SAWEP. “It was never intended to be a fully economical business,” he adds. It also served to demonstrate how to develop power purchase agreements with Eskom, South Africa’s public electricity utility.

A power purchase agreement was signed with the city of Cape Town to buy energy from the Darling Wind Farm. The city then sells the electricity through “Green Energy Certificates” to buyers prepared to pay a higher price for green energy. For example, when the African Wind Energy Association decided to hold a conference in Cape Town in May 2010, the organizers purchased certificates for 9,900 kilowatt hours to ensure that the conference used only green energy.

Catalytic effect
SAWEP was one of several initiatives contributing to South Africa’s adoption of a target of reaching 10,000 gigawatt hours of renewable energy in its Integrated Resource Plan, an energy blueprint for the period from 2010 to 2030. The government is now soliciting bids from independent power producers to generate an initial 1,850 megawatts of wind energy within the next few years.

“The establishment of Darling had an important catalytic effect in promoting wind energy in South Africa, as it showed that on-grid wind could be a reality,” says Lucas Black of the UNDP/Global Environment Facility unit.

As the Darling Wind turbines revolve at a constant speed of 32 revolutions per minute, they represent the baby steps of an industry whose time has come.