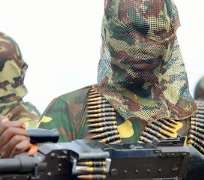 Borno state police spokesman Samuel Tizhe said suspected gunmen from the sect shot dead a Christian trader working in Maiduguri on Thursday. Meanwhile, an official with Nigeria Customs Service said one of its officers was shot and killed the same day by suspected sect members.

Boko Haram, whose name means, "Western education is sacrilege" in the Hausa language of Nigeria's north, is responsible for a wave of violence across the nation's north. It is blamed for killing more than 360 people this year alone, according to an Associated Press count.