Why I Married a White Woman: A Ghanaian’s Tale of Love 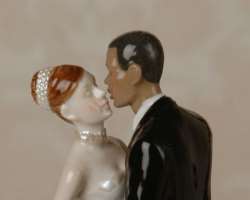 Why I Married a White Woman: A Ghanaian s Tale of Love
Listen to article

As a social scientist, I am imbued with an incessant propensity for sauntering into the trenches of information and assessing, albeit circumspectly, the pertinence of mottled stories, anecdotes and facts to the human experience. Human interactions all over the world are a tapestry of colorfulness, convolution, consternation, sadness and amazement; not to mention that these relationships are also a mélange of both predictable and impulsive behaviors. In all human interactions, however, one thing is generally evident: people in all places have mastered the art and science of evincing a pattern of behavior that can best be described as self-preserving, which, ultimately, may be the first unwritten rule of human survival. That said, I wish to discuss the issue of interracial marriage, particularly the story of one Ghanaian bold enough to venture into such a relationship.

The only Ghanaian male willing to discuss his situation with me (let us call him Kojo) was not particularly forthcoming at first, but after he realized that I had no reason to be judgmental ― my mission was no more than the pursuit and gathering of knowledge, and to find repositories for such ― he opened up and allowed me unfettered access into the recesses of his mind. It turned out that Kojo had met his wife, Jill, while they both were college students, and while Kojo's parents were initially opposed to their son's choice of a white girl for a lover, both Kojo's mother and father would eventually loosen up and accept their son's relationship with Jill, culminating in the duo's marriage not too long ago.

The interesting part of the story, however, is how Kojo and Jill met. The reader may have assumed by now that Kojo and Jill met in a campus hallway, the school's main library or perhaps even in a class that they took together at the university, but the duo met on the Internet, of all places! Jill just happened to be a white girl who preferred men with much darker skin than those of her own kind, but she had initially thought only about dating a burly, tall and educated African-American or biracial male, having not heard anything about Ghana until she serendipitously met and fell in love with Kojo!

With each click of the mouse, Kojo and Jill got to learn more about each other, and then they agreed to meet in person at their university's main library. What started as a casual conversation would soon flourish into something deeper, and today Kojo and Jill are inseparable, with plans to procreate in the near future. Kojo's parents had good reason to be apprehensive at first, because Jill was already a mother at the time that she met Kojo ― the former had a daughter before she went to college, a once-adolescent mother, if you so wish ― and Kojo's parents worried about their son's capacity to cope with having a white stepdaughter, and the complexities that accompany such familial anomalies.

During our conversation, Kojo would inform me that vitiating the cloud of bigotry and extirpating the racial chasm that had plagued the relationship from the outset, due to the unequivocal affectation of Jill's parents in regards to the latter's daughter's “superiority,” was one of the greatest challenges he had had to face in his young life. So, why did Kojo tolerate such a behemoth of disingenuousness, which is nothing more than the constant foliation of prejudice that has been a consanguineous streak in many of us for over 200 years? Well, Kojo's response was strong and unambiguous: to wrap himself up in a blanket of malice and animosity would be defeatist; to challenge Jill's parents' myopia and condescension, Kojo argued, would be the better option. So, Kojo pursued the latter approach and “victory” would follow in due course. But even today, Kojo still feels a morsel of anger whenever he reminisces on the earliest days of his love affair with Jill.

Kojo insists that there are the daily challenges of living with a person of a different race: the different cultural beliefs; the ostensibly Lucullan parties that Jill loves to throw, which Kojo still finds irritatingly profligate; the regular stares of the dilettante; the morose and diabolical glances of the less traveled; the pavane of irascible and contentious interlocution among extended family members when there is a birthday or a funeral or a graduation party in either family, and a host of other untenable burdens that an interracial marriage imposes.

So, why did Kojo do it? Why did Kojo simply not have his parents consult the large array of Ghanaian families in the U.S. and Ghana to find the former a bride of Ghanaian extraction, even if the bride-to-be had to be brought over from Ghana, another viable option? Ultimately, Kojo's answer would point to an affirmation of enduring and complementary love. Love ― that riotous and predatory four-letter word that has confounded the wise and the foolish, the sagacious and the cerebrally insalubrious, the monarch and the peasant, the bourgeoisie and the destitute!

After having lived in a racially diverse society for many years, perhaps I am not so dismissive of Kojo's story of complementary love (Jill being a willing participant, of course!). After all, I believe that love is like the growing of chrysanthemums: the process is painstakingly cumbersome, but the final product is beautiful. Like the chrysanthemum, whose odor some find unappealing, love can come from the most unlikely of sources, and Kojo is living proof of such an argument. Some say it takes an open heart and an unbolted mind to sense the presence of true love, irrespective of skin color. These people further argue that one readily senses love because one's soul is rejuvenated and one's heart races and one's palms become sweaty when around the other party! But is this only a hallucinatory prognosis that is incompatible with events in the real world?

The aforesaid saccharine emotions must now be punctuated by events in the real world ― from the woodlands of Georgia to the backwoods of Mississippi, from the prairies of Montana to the everglades of Florida ― the real world in which Black, brown, yellow, red and white compete for recognition and supremacy, with every other thing finding its own place along this continuum of power! Honestly, can love always overcome the intolerance of a dissonant society? We are burdened by the stereotypes and biases of a cruel society, and those who attempt to stir the nest, proverbially speaking, are not spared the reverberating condemnations of others who do not wish to see a change in the status quo. But some people unapologetically believe that love can conquer all things, but is such a categorization veracious, considering our differing experiences in life? Are the pillars that support love in an interracial marriage not a tremulous scaffold only? What does the reader think?