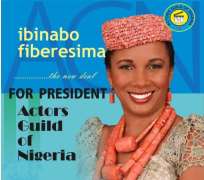 As the race for the top job of the Actors Guild of Nigeria gathers momentum, some candidates have taken their campaigns to social networking sites like 'Facebook', in a bid to shore up popularity, including actress Ibinabo Fiberisima

The former beauty queen is contesting for the position of President of the Guild, a position currently occupied by actor Segun Arinze who is adamant on not seeking a re-election.

She is the only female candidate vying for the top job of the embattled AGN which had been immersed in different troubles for a while now. Other contestants include the (former) Secretary-General of the guild, Emeka Rollas, Steve Eboh and, new comer to the race, comic actor Charles Inojie.

Saturday, March 17 2012, is the slated date for the election which is billed to hold in Ekiti State, Nigeria.