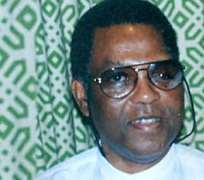 LAGOS, March 14, (THEWILL) - The fragility of the harmony in the family of the late Publisher of The Guardian, Mr. Alex Uruemu Ibru, was on Wednesday unmasked at the Federal High Court, Lagos where the late businessman’s wife, Maiden, and his brother, Goodie, are warring over the winding-up or otherwise of a company.

Justice Okechukwu Okeke was on the cusp of making his pronouncement on the submissions of both lawyers at the petition filed by Dr. Tunji Braithwaite, Maiden’s lawyer, against Tourist Company of Nigeria Plc, jointly owned by her late husband and his brothers. But Mrs. Ibru suddenly stuck her hand up, asking for “two minutes” to speak on her reasons for filing the suit.

“Six months before my husband died, the doctors told me that he was going to die,” she began. “And for five months, he was out of circulation and nobody saw him. Even his family members did not bother about him.”

As she explained, the late Alex Ibru was so dissatisfied with his kinsmen that he embarked on a hunger strike two weeks before his eventual death. When the family members learnt of it, some of them, including Goodie, visited him.

“Then my husband said he was going to fight him to the finish, dead or alive. That even when he dies, he would continue the fight unless Goodie resigned as chairman of the company — Tourist Company Nigeria Plc,” she continued. “He said that of all his brothers, the last person that he thought would betray him was Goodie. They had altered some of the company’s documents, diverted money and committed all sort of atrocities without the knowledge of my husband. I am a widow and I have children to take care of.”

In a revelation that shocked those present at the court, Maiden said that as she was about to enter the court, she saw her husband, who encouraged her to proceed with her actions, because he was himself unhappy with Goodie.

Suing on behalf of Omamo Investments Corporation, owned by her late husband, Maiden is seeking to close down Tourist Company, which owns the Federal Palace Hotel and Casino located in Victoria Island, Lagos, on allegations of indebtedness.

“Omamo Investments, between 2003 and 2009, lent to the Tourist Company $7.1m, N610m, N381m and N19m, which the company has been unable to repay,” she wrote in her petition. She prayed the court to wind up the company for insolvency, adding that she had made several futile demands on the respondent.

“The respondent has failed beyond resuscitation, has insufficient assets to meet its liabilities, does not have the capacity to meet the conditions for which it was incorporated, and has suffered a total erosion of its capital base,” she argued. “The respondent is both cash-flow and balance-sheet insolvent, and has not been carrying on effectively, the business of hotelling and catering.”

She then urged the court to wind up the Company under the provisions of the Companies and Allied Matters Act, CAP C20 LFN 2004, and appoint the President of the Chartered Accountants of Nigeria (ICAN) or any nominee of his as provisional liquidator.

But denying Maiden’s claims, the respondent asked the court to dismiss the suit for its incompetence, as it states no reasonable cause of action and represents gross abuse of court process.

The company’s lawyer, Onyebuchi Aniakor, argued that no grounds, as provided for by law, had been disclosed by the petitioner to justify the commencement of a winding-up proceeding.

There is however a slender chance of an out-of-court settlement, following the presentation of a letter to the court, written by Chief Edwin Clark and J.P Clark — two Delta statesmen who sought indefinite adjournment of the case for the exploration of the option of peaceful settlement.

“As members of the family, the two parties are our relations,” a portion of the letter read. We will like the court to give us the opportunity to intervene and settle the matter amicably.”

But Braithwaite urged the court to overlook the letter because the writers were insignificant to the case and were not party to the petition.

Aniakor seemed slightly disposed to amicable resolution, though, saying that the writers had good intentions. But he left the final decision to the court, saying it was its duty to decide the best way to resolve the case before it.

In his decision, Justice Okeke adjourned the case for one week with the hope that the parties would have amicably resolved the dispute out of court, in view of the provision of Section 17 of the court rules.

Before Maiden’s bombshell lawsuit, the Ibru family had over the years managed to keep the cracks in the large family under wraps and away from the mainstream media until Michael’s wife, Cecilia, a former Group Managing Director of Oceanic Bank Plc embarrassed the family about two years ago when the pleaded guilty to several criminal indictments relating to bank fraud and extensive money laundering. She served her sentence at the Ikoyi Prisons.

It is however unclear how the Ibru family led by Olorogun Michael Ibru will resolve this dispute as Michael, who helped educate his brothers and assisted them create their own businesses, is presently not in the best state of health himself. Whether his other surviving brother, Felix, a former Governor of Delta State and ex senator can save the family from further embarrassments remains doubtful.