EKITI COURT OF APPEAL RULING: WHY IT IS TOO EARLY TO JUBILATE 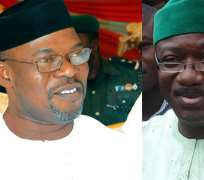 The recent proceeding and ruling of the Court of Appeal delivered in Ado Ekiti on the Oni vs Fayemi case, should give course for worry for all reasonable observers of our judicial system.From the ruling of the Court of Appeal, Ado-Ekiti on Monday, February,27, it may be too early for Governor Kayode Fayemi and the A C N to roll out the drums unless former governor, Chief Segun Oni changes his mind and decides not to pursue the case further.

In the two paragraph ruling, the justices stated as follows:

“We have considered the submissions of learned counsel and the authorities cited. We are of the considered view that the sole issue for determination in this Application is whether this court can set aside its own judgement on the allegation of real likelihood of bias. ln cases of Established bias, this court has consistently refused to review its earlier judgements. See the case of Ukachukwu vs Uba (Supra).

“It follows therefore that where there is an allegation of bias in a matter that has been determined to finality, this court cannot exercise its jurisdiction in favour of the applicant. This case of likelihood of bias would have been relevant if it had been raised at the hearing of the appeal before judgement was delivered. Having not been raised at the appropriate stage, this application lacks merit and is hereby dismissed. Parties to this application shall bear their individual cost.’’

As can be seen from the ruling, the justices had no time to dwell on facts of the case that were before them. The Applicant’s grounds backed by Affidavit and exhibit was that Section 36 of the 1999 Constitution GUARANTEED FAIR HEARING and the breach of it by the Election Panel robbed the Tribunal of its Jurisdiction and thus liable for its judgement to be set aside.Section 36 (1) of the constitution states: “In the determination of his civil rights and obligations, including any question or determination by or against any Government or authority, a person shall be entitled to a fair hearing within a reasonable time by a Court or other Tribunal established by law and constituted in such a manner as to secure its independence and impartiality.” .

In ABIOLA V FRN , Uwais JSC at page 248 stated as follows: “The requirement of impartiality as intended to prohibit a person from deciding a matter in which he has pecuniary or any kind of interest, such other interest may arise from his personal relationship with the parties to the case or may be inferred from his conduct or utterances during the hearing of the matter. Hence the remark per Lord Hewart CJ in R V SUSSEX JUSTICES EXPARTE MC CARTHEY (1924) 1 KB 256 @ pay 259 that it is “Not merely of some importance but of fundamental importance that justice should not only be done but manifestly and undoubtedly be seen to have been done.”

In the case under review, the ground of Oni was the unrebutted affidavit evidence of Senator Umaru Dahiru, Chairman, Senate Committee on Judiciary, in a March 2010 petition to the National Judicial Council (NJC). Senator Dahiru stated in the affidavit that Justice IsacAyo Salami and Senator Bola Ahmed Tinubu, national leader of the Action Congress of Nigeria (ACN) were friends and that they had close affinity. As a member of the NJC, Justice Salami was aware of Senator Dahiru’s petition and averments in the affidavit, and in spite of this, he still went ahead to constitute and seat as Chairman of the Appeal Tribunal that gave the judgment.

This, based on decided cases, no doubt renders the judgement a nullity for constitutional breach of fair hearing and lack of jurisdiction because of the likelihood of bias that could be inferred therefrom.The Applicant in his affidavit before the Court also stated that he became aware of this evidence of close affinity only after the judgement of October 15, 2010 through a publication of the Affidavit in the Nigerian Tribune newspaper of February 17, 2011.

Curiously, the Justices in their ruling gave the following instances where the Court can set aside its decision:

A. When a judgement is obtained by fraud or deceit either in the court,or of one or more parties.

B. When a judgement is a nullity, a person affected by an order of court which can be properly described as a nullity is entitled Ex- debito justitiae to have it set aside

C. When it is obvious that the court was misled into giving judgement under a mistaken belief that the parties consented to it

D. Where the judgement was given in the absence of jurisdiction

If properly evaluated, Oni’s grounds for asking that the judgement be set aside could be found in B and D above and there are several cases where Courts have set aside judgements deemed final on the grounds of breach of constitutional provisions. Most importantly that it has been submitted that denial of fair hearing is a Jurisdictional issue which nullifies a proceedings no matter how well conducted. SEE OKAFOR V A.G ANAMBRA 1991 6 NWLR pt 200 659, ENIGWE V AKAGWE (1992) 2 NWLR PT. 225 -505. It is further submitted that where the decision of a Court or Tribunal is said to be final, it can only be final in relation to the proceedings giving rise to the Appeal and not in such an absolute sense that an Applicant whose fundamental rights has been impugned cannot complain.

In F.R.N V IFEGWU (Supra) UWAIFO J.S.C (as he then was) stated further at page 181 paras G-H “I am fully aware that the decision of that Tribunal or of the Appeal Tribunal is said to be final. I do accept that fact. But it is only final in regard to the proceedings which gave rise to the Appeal. The Appeal finally terminated those proceedings. But that did not terminate the Respondent’s entitlement to seek appropriate redress for the alleged breach of his fundamental right arising from those proceedings in a competent Court.” See also the cases of R V. MEDICAL APPEAL TRIBUNAL, EX PARTE GILMORE (1957) 1 QB 574 AT P. 589; Per PARKAR, L.J R V. NAT BELL LIQUORS LTD. (1922)2 AC 128 AT 159-160; per LORDS SUMMER, TAYLOR V. NATIONAL ASSISTANCE BOARD (1957) 1 ALL ER 183 AT 185 per DENNING, L.J.

It is in the light of the above decisions that one should support the move by Oni to test the Court of Appeal ruling at the Supreme Court if only to discover the new thinking of the final court. The position of the Appeal Court in this case is that; “It follows therefore that where there is an allegation of bias in a matter that has been determined to finality, this court cannot exercise its jurisdiction in favour of the applicant. This case of likelihood of bias would have been relevant if it had been raised at the hearing of the appeal before judgement was delivered.”Can this position stand, where the applicant was not aware of the facts of the affinity during the proceedings and the Judge who ought to have disqualified himself from handling the case knowing that his alleged relationship with a key figure in a case before his court has become an issue, did not do so? Does this not affect or touch on jurisdiction of the court which is one of the grounds of declaring a judgement a nullity? These posers can only be distilled finally at the

Apex Court.
Another point by the way is an issue of the presence in the Panel of Justices of Justice Kudirat Kekere-Ekun, daughter of renown ACN leader in Lagos, Chief Fasinro, whose brother, Hon. Habib Fasinro is a House of Representative member, representing ACN Lagos and her husband, a known friend of Tinubu. Even at the sitting, Justice Kekere-Ekun displayed open hostility against the Applicants counsel such that her bias was known to everyone.Perhaps the Applicants counsel did not want another controversy, the ropriety of Justice Kekere-Ekun’s membership of the panel and her open display of hostility towards the Applicants Counsel would have been made an issue.

Also, for us as a witness to the court proceedings, it appeared that the court had made up its mind, notwithstanding the case of the parties. There was hurried and harried proceedings as the Justices hurried up the counsel on both sides and would often warn the lawyers in the midst of making their case to “hurry up and round up.” At some point, Chief Ladi Williams (SAN) pleaded that he be left to handle his case as he was used to by elaborating on points of law upon consistent hostility of one of the justices.

Counsel were often interrupted by judges by saying “ok, don’t worry to read, we will check,” “don’t waste your time, we understand,” “don’t worry your time is running.” Observed also was some form of intimidation by some of the Justices of counsel such as “why are you stretching that point … we have no time ‘’ an interruption of one of the respondents counsel .

It was visibly shown that the Justices were not ready to come back to Ekiti for anything on the case and curiously, they asked for only three hours break to write their ruling on such a sensitive case where tons of papers and citations were presented by parties. It therefore was no wonder that the ruling was a mere NINE Pages with ONE Page devoted to the heading, names of justices and list of counsel of parties. Of the other EIGHT Pages, only TWO Paragraphs related to the ruling.

This case is however a lesson on how parties in a case should not try to seek extra-judicial ambush on cases before the courts because the pendulum could actually swing in their favour.

Few days to the hearing, the ACN had went to town with a blitz of propaganda and a petition to the Chief Justice of Nigeria (CJN), asking that the Court of Appeal panel be disbanded while also accusing the Acting President Court of Appeal, Hon. Justice Dalhatu Adamu of some heinous plans in setting up the panel.

Even while the Court was still sitting, ACN Spokesperson, Lai Mohammed issued another statement, castigating the Acting PCA for setting up the panel.What has now become of those hair-splitting noise? Would the party still stand by its request to the CJN, which was curiously echoed by Femi Falana self-confessed pro-democracy activist and lawyer, who should be championing rule of law?Why should any party that has claimed its victory through the courts be now afraid of other parties approaching the court to ventilate their grievances?.The way a particular brand of politicians have taken over the soul of the judiciary should worry Nigerians and its leadership.