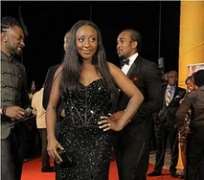 The premiere of I'LL Take My Chances,the wave making film co-produced by Ini Edo-Ehiagwina and Emem Isong is regarded as the best star studded movie premiere ever hosted in the industry.

However, not everybody is aware of the secret behind the success.

Going by the information gathered from insiders,Akwa-Ibom State Governor,Obong Godswill Akpabio is said to be the pillar behind the premieres of the movie that took place first in Uyo,the State capital last year which coincided with the State's 24th year anniversary and the one that took place in Lagos a few weeks ago.

The Uyo leg of the premiere turned out to be a very enormous event as it was the Governor that footed the bills of top Nollywood stars and journalists who went to cover the event and lend support to their own.

Subsequently,the premiere was given a political undertone and became one of the biggest events that were held in Uyo last year.

Governor Akpabio who has proven to be the most generous governor in Nigeria today made sure all the guests went home with gifts of various magnitudes.

Having made a statement in Uyo,Governor Akpabio did not stop there as he was said to have splashed millions on the young producer,Ini Edo and her partner,Emem Isong,who are both from the State,for the Lagos premiere of I'LL Take My Chances.

According to information gathered,the multi-million naira gift was given to the two movie makers a few weeks to the screening that took place at the Silverbird Galleria.

We equally learnt that Governor Akpabio who bagged the prestigious Sun Man of the Year Award a day after the premiere,decided to stay in his hotel,the Federal Palace Hotel beside the Galleria,probably to forestall any controversy.

But we gathered that the hosts visited him afterwards.