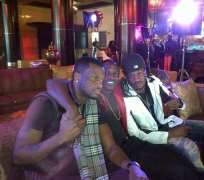 The wealth of the dynamic duo, Peter and Paul Okoye popularly known as “P-Square”, is not in question.

They have weaved their way to the top through hard work that has seen them reap dividends in form of endorsements,concerts and the likes all over Africa, including the N24m deal with Globacom.

Months back,they completed a house valued at N300m in Lagos, a hotel, as well as two multi-million naira factories in Jos.

The latest gist about this identical twins is that they've stepped up their game .

According to close source, ever since P-Square joined Konvict Music record label,owned by US-based Senegal-born singer Akon,their Fee Per Show has gone up.

We gathered that Psquare now earn about one hundred thousand dollars each time they are engaged by promoters especially abroad.

The promoters also provide their tickets and other logistics.

We can exclusively inform you that P-Square is the highest paid musician in Nigeria for now.

Just last week they were in France and according to what we gathered,they were paid about eighty thousand dollars ($80,000).

P-Square keep on soaring like a bird in the sky.