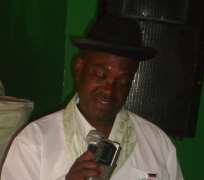 In a colourful and memorable event, the member of Akwacross Community of Nigeria residing in The Gambia on Saturday, 3 March 2012 celebrated the Akwacross Community Day and as well launched their new 2012/2013 Community Almanac at the Presidential Award Scheme Hall situated in Bakau, Gambia. In the historic event, representative witnessed the Akwacross Day fanfare from Nigeria Embassy, important dignitaries in formal and informal sectors both from Nigeria and the host country, Gambia.

Prince Daniel Antigha, chairman of Akwacross Community in The Gambia expressed his delight to everyone that graced the occasion. He gave a brief history of the Akwacross Community as for the benefit of those that are not from the community or Nigeria Nationality. He explained that Akwacross is a combination of two brother states in Nigeria known as Akwa Ibom and Cross Rivers States respectively.

In accordance to the origin of Akwa Ibom State, the able chairman noted that Akwa Ibom is a state named after the Qua Iboe River and is one of Nigeria 36 states with a population of over 5million people and more than 10 million in the Diaspora. He asserted that the state was created in 1987 from the former Cross River State and is currently the highest oil and gas producing state in Nigeria. On Cross River Stated, he said it is another state in the country was named after the Cross River in 1967 from the former Eastern Region of Nigeria by the then General Yakubu Gowon, a one-time former Head of State.

According to him Gen. Gowon changed Eastern Region to Cross River State and late Gen. Murtala Mohammed, another Head of States who was ousted through military coup in 1976, implemented this.

With full pride of his community progress, he said, “we are people of rich culture, customs and traditions. So it is worth noted that the interest of society is greater than individual interest and individual development and self-actualization is encourage as a sum total of societal growth and development.”

The Akwascross chairman however added that they are minority in Nigeria, small in number compare to other major ethnic grouping, but they are a force to reckon with as there is never endeavour you will not find their indigenes in Nigeria and as well here in The Gambia.

In his speech, The Gambia Honourable Chief Justice Agim who is an indigene of Akwacross applauded the general members and the entire Nigeria community representatives for their togetherness and fostering unity among others. He shared similar sentiment with Prince Daniel Antigha about the creation of the two states and their brotherhood. He therefore said the association was born to bring together the indigenes of the two states in order to enable them see to the welfare of individual and provide support to the society they found themselves when the need arise.

The Chief Justice commended their host country for its peaceful, stability and the citizens accommodating and hospitality. He also commended the Nigeria High Commission in the Gambia for a job well done as Ambassador Esther John Audu always giving Her Commission's support to the Nigeria communities in the country. “Nigerians are people that love each other and this is what they extended to anywhere they reside,” Chief Justice Agim noted. He therefore urged each an every Nigerian to export back home this hands of their friendliness as “we are one because among the ways to contribute to humanity is to be a good neighbor, tolerant, endurance, peaceful. And if you cannot be any of these your purpose of existence is defeated,” he noted.

Honourable Agim appealed that everyone should try to be closer to God and holy because the essence of worship and the best way to worship God is to love your neighbours. “So, love one another and respect the law of the country you are,” he urged all Nigerian communities at the celebration.

As members who was among those that newly called to Bar by the Government of The Gambia, The Gambia Chief Justice therefore used the occasion to thanked the president of the Republic of the Gambia His Excellency Professor A J J Jammeh for given the mandate to call lawyers to Bar; as well he congratulated these new lawyers and wished them the best in their new challenges.

The celebration was marked with a lot of traditional attractions.