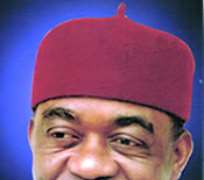 The All Progressives Grand Alliance (APGA), Abia State chapter has called on the embattled Governor of the state Theodore Orji to resign if he cannot perform. This is even as the Civil Liberties Organization (CLO), Aba chapter has said sacking of commissioners and other aides in the state and apportioning blames, over the booing of the governor last week at the Enyimba Stadium in Aba during the reception of the remains of the late Chukwuemeka Odumegwu-Ojukwu, would not solve the unpopularity problem starring the government in the face.

Orji, whose aides had before now made many believed he was so much loved by his people, met one of his most embarrassing moments as people who thronged the stadium booed relentlessly when he was called to present his address.

However, reacting to comments by some government officials which tend to suggest it was APGA in the state which mobilized people that booed the governor and pelted his convey with sachet (pure) water in Aba, APGA in a release jointly signed by Prince Nnanna Ukaegbu and Chief Sunday Evuru, state chairman and secretary respectively, said if the governor must look for scapegoats after the Aba incident, it should be his aides who it said had failed to tell him the truth of how Abians felt about his administration.

The party said it saw the embarrassment meted to Orji on February 28 'as a normal reaction to an abnormal situation,' stressing that, 'the governor should toe the part of reason and listen to the yearnings of Abia people who are groaning under his governance and immediately respond to their plight by providing the dividends of democracy instead of looking for whom to blame.' The release further stated, 'there is no where in democracy the people cannot express their displeasure with the way they are being governed as they did on February 28, at the Enyimba Stadium which was a clamour for responsive and responsible governance.

'APGA in Abia State decry the resort by Orji's aides to name-calling, heightened propaganda and unmerited pontification in response to the peoples' demand for good governance and provision of basic amenities.

'As we call on Orji to perform and discharge his constitutional responsibilities to the people of Abia State or where he is unable to do so, to honourably resign, we equally challenge the state government to assemble a team of journalists from reputable media houses to undertake a tour of not just the roads claimed to have been rehabilitated but the entire Aba and Abia State at the expense of our great party. After all, the roads claimed to have been built by the government are not in Moscow (Russia) nor in New York (United States of America), they are all in Aba.'

Meanwhile, CLO has condemned the present apportioning of blames over the booing incident of the state governor in Aba. In a released signed by the Chairman of its Aba chapter, Dr. Charles Chinekezi, urged the government to stop blaming a rival political party as the mastermind of the hostile reception accorded the governor in Aba last week but instead strive to meet the yearning of the people.