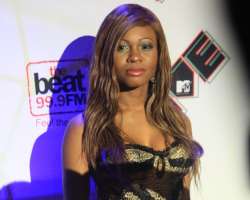 Going by tweets by Goldie Harvey, who is regarded as Lady Gaga's copycat, Goldie may soon land in big trouble if appropriate steps are not quickly taken.

Goldie took to her twitter handle, @goldieharvey yesterday to tweet her ordeal with one of her security guards.

According to what Nollywoodgists.com gathered from the tweets, Goldie recently sacked the security guard for stealing some litres of diesel in her apartment, Parkview Estate, Ikoyi, Lagos.

She alleged that the man has been caught severally stealing diesel until she recently called if quit with him. She tweeted that the equivalent cost of 50 litres of diesel was deducted from his last salary before he was asked to go.

This did not go down well with the security guard, who threatened to acid-bath the up and coming artiste before killing her.

Goldie tweeted that the security guard agreed to the diesel theft charge but questioned why Goldie would deduct the equivalent price of 50 litres of diesel from his salary as against 20 litres he admitted stealing.

Goldie claimed the guy steals about 100 litres from her reservoir tank twice a month.

According to Goldie's last tweet as at the time of writing this story, Goldie has vowed to officially report the case to the police for further action.