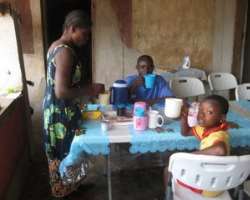 I have been very fortunate to be able to live with a family that is very involved in the community and who is a client of the Business Advisory Centre. Therefore, not only are they a large and diverse family who is committed to education and development, but I will learn first hand some of the pros and cons of the services that the BAC provides. There are about…15 or so people that are here all the time, and I won't introduce them all now, but eventually you will get to know them as well as I do!

Another thing that is wonderful about this family, that despite the initial glaring differences, they are so similar to my family at home. Granted this household is a little more bustling than my own, the feeling is about the same. Kids running around (with or without clothes) eating all the food, people yelling at one another, watching TV, listening to music, sitting around talking, there is an obvious mess to an outsider that the people in the house have grown to ignore, people doing and wearing weird things laughing with one another…they are just regular people, which I really appreciate.

At first I was worried that this family was too wealthy for me to be living with….then I realized, though they may have many things compared to others, they still don't have running water, they still have animals running around their compound, and they still sleep under the open sky when it's too hot. And most importantly, they have worked very hard to get where they are, and are still working hard to better themselves and their community. They have a very diverse household of income generating activities. Even though many of the luxuries I thought I was leaving behind in Canada are still with me here in Ghana (electricity, toilet, privacy, etc), I think it's important for me to understand that this isn't that uncommon…though Dorothy may live with much less, I think it was humbling to realize that not everyone in Africa lives like she does. And although I desperately want to understand her struggles, I think its important to break the stereotypes of what we have in our heads is the norm in Africa. As one of the boys in the house said when I asked if many people had electricity (to which the answer was yes) he said, its not like it is on TV. I am looking forward to learning so much from this family that was able to work their way out of the stereotype to better understand how it is possible in this context how to get out of extreme poverty.

I have attached some pictures of my house, my room and a quick picture of 2 of the boys who have been very friendly and kind in showing me around and teaching me Gonja, the local language.