I can’t wait to have kids —Ini Edo 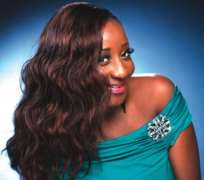 Sexy screen goddess Ini Edo stormed Nollywood over a decade ago. The Theatre Arts graduate has continued to soar higher in fame. Only recently, the pretty diva delved into movie production and already her second flick I Will Take My Chances is been applauded by industry watchers and fans alike. In this interview with MERCY MICHAEL, the actress opened up on the new flick, marriage, scandal and passion among other things:

THE premiere of I Will Take My Chances has come and gone. What is the possibility of its success when it finally hits the cinema?

I am hopeful to God that it will succeed because it is a beautiful work. We are taking all the chances that we can get and hopeful that it will work.

How long did it take you to make this movie?

Do you have any stage experience?

Yes, I do because I studied Theatre Art.

There is this notion that actors with stage experience are better actors. What is your take on that?

Yes, because apparently they have some sort of training. You have to be trained to be able to do stage. Stage is not like movie that anybody can dabble into. So there is some level of truth in that because of the kind of training that they receive.

Having played all sorts of roles, what still remains your dream role?

If you were not an actress, what other field would you have being in and do you think you would have excelled this much?

Yes, because I'm a serious minded person. Everything I set my mind to do, as long as I love it, I excel in it. But probably I would have been a lawyer or a newscaster.

In life we learn everyday. What is one new experience that you've come by of late?

Never to have high expectation of anyone…

How has marriage affected the kind of roles that you take now?

Have you ever considered quitting acting?

What is it that can make you quit acting?

I honestly don't know because acting is a passion. It gets to a point that it is no longer about the money; it's about the love you have for the job.

There is this saying that you don't leave habit, habit leaves you. What are the habits that marriage has taken from you?

Do you still smoke?

Did I smoke? Because, you see me smoking on screen, I don't smoke.

When are you going to start making babies?

Are you scared of losing your physique?

No. When the time is right, I will make babies. I'm not afraid of losing my physique. Oh no! I love children. I can't wait to have kids.

What is the worst scandal that has been written about you?

When a certain journalist wrote a drug story about me, I don't want to revisit the story because it's very ridiculous.

You've come of age in this industry. How much do you earn now?

How is it like combining work and being a wife?

My dear, it is not easy. We just try. I set my priority straight. I plan ahead and know when to be where and when not to be where. I don't put too many things on the plate at the same time that might prevent me from doing certain things when I have to do them. I still do what a woman is supposed to do. I come back from work and cook.

How do you deal with emotional needs when you're not with your hubby?

He's always here and I'm always there when he's not here. Some emotional needs are quite distracting sometimes when you have something serious you're doing. It's not food (laughs).

Right now, you're dressed down; your hair is not made and no makeup. You must really have a lot on your plate. What are you doing at the moment?

I just got back from work. I was filming in Enugu. I got back yesterday and I had to be here today so there was no time. Then again, I'm making my hair for my premiere so I'm just taking my time.

What fascinates you about the role you're playing in the movie?

My character is a corporate escort so to say. I don't think I've ever done that before. I wore mostly big dresses, flowing dresses, not the contemporary, skimpy, boobs showing dresses.

Tell me about your role in your new movie?

My role carries the core message of the movie. My character is a girl who is possessed of a spiritual force from her ancestral lineage. In lieu of that, she has to serve the god of the land at the shrine. But she wants to go to school, she wants to fall in love and get married. The consequence of her failure to obey the custom of her land is death and she decides to take her chances, even if it leads to death.

What is the similarity between that character and the real Ini Edo?

To be candid, there are some similarities. I'm a goal getter. When I really want something that I believe in, I go for it, not minding its challenges. If I believe I can do a thing and you say to me, you can't, if it's good and I am convinced that it has benefits, I will go for it and take my chances.

How long have you been in this industry? And would you say you're fulfilled as an actress?

Over 10 years. I am fulfilled as an actress although I feel I've not gotten to where I'm going yet but so far I'm satisfied with where I am. I'm content, but there is still an urge to push further.

What are you thoughts about Nollywood?

Nollywood is good and it's a place that we can turn into our own Hollywood. Other than the fact that it generates a lot of revenue for the country, it is an industry that will thrive if we do what we are supposed to do and have the right people at the right place.

So when did the love for acting come?

I used to love Wiliwili (laughs), though, I never saw the guy that acted it. I watched a lot of local dramas, Chinese and Indian films but I can't really place the particular actor that ignited the interest for acting in me.

Tell us about growing up?

Growing up was fun but I was like the rough coin. I was always beaten. I constantly had injuries because I played rough thereby receiving beating from my parents. I grew up in a very religious home and it stuck on me. I had good and bad times, economically and otherwise but at the end of the day, it prepared me for adulthood so to say.

How religious are you now?

Don't try me o. I won't say religious but I put God first in everything that I do. He's the only one I always run to at the end of the day!

What would you say life has taught you?

To believe alone in yourself, trust nobody and hardwork pays off.

How have you been able to keep this look?

I think I was prettier when I was much younger. I saw some of my old pictures and I was like wow! Was this me? How did I become like this? I don't know what I do really; not that I do so much. I work out as much as I can and try to eat right. I try to keep my skin colour by moisturizing and basically I try to be happy.

In an industry where a lot of actresses try to bleach or tone their skin, has it ever crossed your mind to tone a little?

I think it's the most stupid thing to do. It's a big sign of lack of confidence. And I have never been tempted to.

What is the craziest thing a fan has ever done to you?

What's the best birthday gift you have ever received?

What do you look forward to getting this time?

I don't know what he has in store for me. Whatever it is I will gladly accept it.

I don't know what he was attracted to. But for me, he is a loving personality. He is very understanding and passionate. He's been a strong pillar.

And how does he react to scandals?

He understands my profession and he knows that I have to do what I have to do. But naturally you need to give a good explanation for whatever negative