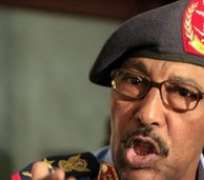 The court said there were sufficient grounds to hold him responsible for 20 counts of crimes against humanity and 21 counts of war crimes.

In December, a senior Sudanese official dismissed the request for the warrant as “ridiculous”.

Omar al-Bashir denies the charges of genocide, crimes against humanity and war rimes in Darfur, saying they are politically motivated.

The UN estimates that more than 300,000 people have died in Darfur, mostly from disease, since rebels took up arms in 2003.

The government in Khartoum puts the figure at about 12,000 deaths, and says the number of casualties has been exaggerated.

'Counter-insurgency campaign'
ICC prosecutor Luis Moreno-Ocampo asked the judges for the warrant in December, saying Mr Hussein was among those who bore the “greatest criminal responsibility” for atrocities in Sudan's Darfur region from August 2003 to March 2004.

The mainly Arab Janjaweed militia is accused of carrying out a policy of ethnic cleansing and genocide against Darfur's black African population after rebels took up arms in 2003, accusing the government of ignoring the region.

According to the ICC, attacks followed a pattern, with Sudan's military surrounding a village, the air force bombing it and then soldiers and Janjaweed fighters going in on foot, killing, raping and looting.