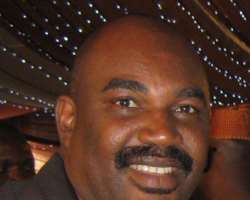 Jacob Idinye is a veteran media practitioner and a key management staff of Darr Communications in Lagos (Nigeria). Outside his professional career in broadcasting, he is equally an ambitious politician in Edo State from the national ruling party, Peoples Democratic Party (PDP). Before he publicly declared for PDP in 2007, he ran as a governorship aspirant under the platform of Action Congress (AC) but could not clinch the ticket as the governorship flag bearer during the AC gubernatorial primaries. Aside politics Idinye and his family still devote time to commune with God in their Christian way.

He spoke extensively with modernghana.com about the victory of Adams Oshiomhole (Current Edo State governor) his personal future political plans in Edo state and other topical national political issues in Nigeria.

How would you describe Adams Oshiomhole's victory in Edo state that displaced your man Prof. Osunbor at the state Election Tribunal?

Ans: Well this is to tell you how law abiding Prof. Osunbor his, although he is no longer the governor today but he comported himself very well and ensured that the rule of law was not trampled upon. He his modest in everything he has been doing even before he became the governor of Edo state. Whether Oshiomhole's, victory was a well deserved one or a victory for democracy as some people will say, is not an issue to be discussed today. Again everyone should know that winning election is not the issue but good governance is what people are looking for, especially those of us who are political stakeholders in the state.

As a stakeholder in Nigeria politics, would you like to react to the current faceoff between the federal government and Lagos State government of Nigeria regarding the creation 37 Local Council Development Areas (LCDAs)?


Ans: I belong to a progressive party and not conservative party which is PDP and I can say that Fashola who is in AC camp has performed creditably I think I need to acknowledge that fact. I'm a resident of Lagos no doubt I'm also a stakeholder like you have said despite the fact that my political aspirations are limited to Edo State for now. What I will say is simple and I think I should be non partisan with my views on these sensitive issues because it is a tussle between a PDP led federal government and AC controlled state. I am not a lawyer but I know that there was a conspicuous lacuna in the judgment of the Supreme Court over this matter. Fashola however needs to be very careful as some politician may want to use this faceoff between Lagos State government and federal government to cause confusion and over heat the polity, but I will urge the Lagos State governor to follow the law book accordingly I mean the due process and thank God he is a Senior Advocate of Nigeria (SAN). In as much as we the citizenry obey every laws of Lagos State which established LAWMA, LASTMA, LASEPA etc, and we pay our taxes and levies brought forward by Fashola led administration, Lagos state should also try and go through due process before resulting to those 37 LCDAs and again they shouldn't have even conducted elections in those controversial areas in the first place. He should have called those LCDAs in a name I call New Development Centers (NDC) and he could put people there and address them as coordinators and so on, at the end of the day the same development they are doing now will still happen in the interest of the good people of Lagos State.


It was reported in some quarters that there was misunderstanding between Prof. Osunbor and the former chairman PDP board of Trustees Chief Antony Anenih, would you have said this scenario contributed to the defeat of the party at the Tribunal?


Ans: I love this very question, but before I respond I will like to thank you for your professional conduct. Whilst there was misunderstanding in PDP family the opposition parties were strategizing, putting their heads together and thinking of how to nail PDP, that in itself affected our party a lot. Honestly the party did not create room for dotting all the I's and crossing all the T's. If we had our houses together perhaps what people are describing as victory today wouldn't have come to play. Again the people of Edo should show appreciation to Prof. Osunbor, he tried a lot in the areas of rural electrifications, road construction etc within one and half years. Edo last experienced such significant achievements in the state in the days of Ogbomudia and Ambrose Ali of blessed memories.

What in your own thinking should the people of Edo state expect?


Ans: Everyone is aware that I am interested in the progress of my state and I'm in the party of the progressives which is PDP, and I'm sure you know that too (laughs). I expect all parties in the state to work together as one entity so that the state can move forward. The state should reform itself from 'back bite' to its real name which is the 'heart beat of the nation'. The new leadership should improve on the legacies of Osunbor and should endeavor not to employ charlatans and mediocre to his administration; unemployment should be tackled, education should also be given attention at all levels, Millennium Development Goals (MDGs.) should be part of the target for this present leadership. All political structures on ground should be maintained especially the existing Local Government, there should be no use of fiat. More importantly the present leadership should tailor its style of governance on real democratic and tenets and eschew trade unionist's style of leadership.

What will you want to share with the people of Edo State having shown interest to run for the gubernatorial race in the state come 2012?


Ans: I describe politics like a football game of which one of the opposing teams would eventually come out victorious. People should learn how to be fair to one another, whoever that wins should embrace the other party that lost out; look at what happened in the US election John MC Cain made a public statement congratulating Barack Obama, I think Africans should learn how to practice politics without bitterness. I think it is just right for me to inform the people of Edo state and Nigerians at large that I will contest in the next gubernatorial race in Edo state in 2012 under the platform of PDP and I have no doubt that I am not far from victory. I have all it takes to be the next governor that will emanate from the Edo North Senatorial zone of Edo state.�I am now more experienced with the burning desires to explore my party's manifestoes and values in the interest of my people. I guarantee all Edo indigenes new improved manifestoes, and I will make Edo a mega city. I will hinge my administration on Politics of construction, understanding, and politics of total acception by the good people of Edo State. Factories will work, we would explore the palm cannel for our good people and expand our employment plans and strengthen the economy of our state the more through exportation of palm oil and other cash crops in the state. I will also concentrate on urban renewal and rural electrification project if eventually elected as governor of Edo state. The plans are enormous and I advice Edo people to cast their vote wisely in 2012, PDP is their party in Edo and they should pardon the party for the mistakes of the past.

What do you have to say about those screaming headlines in the media about Edo State?

�
I respect the practice of journalism a lot and I also commend Nigerian journalists for their good works. However, journalist should learn to be careful in their style of reporting and they should learn to uphold the ethics of their profession come what may. They should try and check their facts and ensure that they are correct before going to press. Edo State PDP political situation is not as bad as they are portraying it that is all I can say for now. I think this should also be on record in the interest of Nigeria both at home and in the diaspora. I expect Nigerians to through their weight behind Professor Dora Akunyuli in her rebranding exercise. We should all learn to own this initiative. Some are criticizing her with the approach she is using but that is very wrong, she has started something good and Nigeria should learn to toe the right part in order to redeem our battered image. Nigerian journalists in the print/broadcast media as well as professional brand managers should join in this campaign, I have no doubt that Nigeria will be great again.

[email protected]
+2348023660770
Emmanuel Ajibulu is a representative of modernghana.com in Nigeria.