I am spiritually connected to Africa, says Frances Fischer 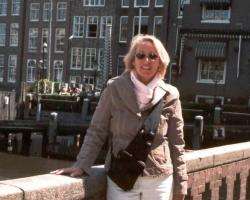 Life has a special way it dramatizes its ironies.
Man can choose any name but cannot choose his mother; man can choose where to live but cannot choose country of origin; man can choose what to think but cannot choose the true feelings from the heart.
Frances Fischer, is a dutch citizen, but she has running in her vein insatiable longing to visit Africa.
“This is something l cannot explain....l think it is a spiritual thing...l am connected to Africa spiritually...l am not alone with this kind of passion…..” she went on to say that “ somebody told me, when you've been to Africa, it touches your soul, and you want to go back and feel the atmosphere again....When there is something about Africa on television, my heart opens up and l feel it again. Also the movie “The power of One” has touched me in my soul”
Frances,55 years, stayed in Harare(Salisbury), Zimbabwe (Rhodesië) with her parents, brothers and sisters between 1959 and 1962. The period planted in her a deep connection, that, even today, the feeling could only be quenched with a return visit to Africa.
She spoke glowingly about some beautiful things that attract her to Africa. First, the joy and simplicity with which Africans carry on in life despite the multiple and complex problems they face.In her words: “It is really amazing how Africans bubble with joy and excitement and live a simple life despite multiple challenges or troubles that could kill some other races” This attitude has a “postive influence in my life.....”
African music, with its peculiar beats and rhythms and voices, laced with diverse songs of african origin strike an overwhelming connectivity to her soul, it makes her joyfull “The rythm of African beats and music touches my body, soul and spirit “in an inexplicable way. “My sister told me, that near us where the Africans lived, they made that music. I could'nt remember, but thats why it moves me….. Also the space of living in very nice houses with beautiful nature surrounding, with very big rocks…. we climb in trees and were always playing on the rocks in the neighbourhood. I think the love for nature and much space around me has his roots in Africa”
Frances, a retired military officer, had her stay in Africa cut short by the second marriage of her mother which could not accommodate her and her brother and sister. They had to be relocated to the Netherlands with their father's mother, an incident she considered one of the worst moment of her life. But she did not return to Netherlands without
making some collections of African artworks as presents for the family in the Netherlands and some for herself to keep her memory aflame.
The mother of two grown up boys (one 32 and the other 29years) has a wish to go to visit Africa soon. “l hope to do a safari-style trip when it is possible…..And in combination to visit the places I have lived in Harare(also Emerald Hill, the boardingschool), Victoria Fall, Cape-Town (holiday with the boardingschool)and other places l use to play with other children in Zimbabwe”
She recalled with euphoria how she used to play with other kids in the neighbourhood of (Bulawayo)Harare.
“During my brief stay we really enjoyed ourselves playing with other African kids....then we did not think of what your colour was or was not...all we knew was play...whether white or black...and our parents never stopped us or poisoned our minds with racism”, she alluded. “I also remember that the African children were playing with self-made cars made of iron. Later I saw that on television about Zimbabwe and I remenbered that again. And the round houses made of red mould with thatches they built, was nearby our house
Also in that same interview about Zimbabwe, I saw the cloth where so colorfull and nice printed and made from simple material and they have now a much better way of living so it looks …….” said Frances
“l long to go back to Africa (very soon) to feel the atmosphere where I,ve lived as young girl and feel the big space of nature that I love so much!”