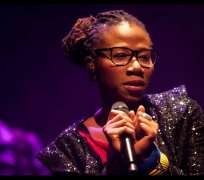 The battle line is drawn between Asa and her former music label owner, Mr. Kelvin Luciano Gabriel over what the former tagged the infrigement of her intellectual property.Only the court of law can settle the matter, Asa said through her rep.
In an email sent this afternoon,Asa's rep disclosed that they will take every legal means to secure what belong to them.

Read the email below

"It has come to our attention that a certain Nigerian Chronotech Limited (a CD factory) based in Lagos Nigeria is preparing to go into commercial production of a purported Asa music production titled 'Down On Me'.

We wish to state categorically that Asa was not involved in this production in any form and the artiste's team is very shocked by this misrepresentation from Question Mark entertainment or MacKings Limited, two organisations with which she has no relationship whatsoever.

We also take this opportunity to notify individuals and
organisations that this production and the associated illegal use of the Asa trademark are a violation of her intellectual property. We have informed our lawyers and appropriate action will be taken against any individual, body or corporate entity associated with this.

We thank Nigerian Chronotech for its professionalism in this matter - and for promptly alerting Asa's management to confirm the authenticity of this production, and look forward to this professionalism from other Nigerian music industry stakeholders.

Asa continues to work hard on her music, and fans and the public will be promptly informed of any new releases through her management, publicist and other official channels"