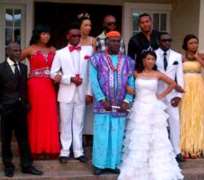 The name, Tonto Dikeh surely strikes a chord in minds of many. The name has different meanings and perceptions to it.

To some, she is a controversial being, some see her as a wonderful actress, while others may see her as an actress that does anything to stay controversial just to stay up in the competitive industry called Nollywood.

The Petrol-Chemical Engoneering graduate of Rivers State University of Science and Technology once said marriage was not on her mind.

In an interview with Nollywoodgists.com in December 2011, Tonto told us she was not ready to go through child bearing process. Her reason was that she has a phobia for pregnancy and child bearing.

In this picture, Tonto is looking stunning in a wedding gown. She is on a movie set in Umahia with other Nollywood actors, where she playing the role of a wedding planner.

According to an inside source, who told Nollywoodgists.com about Tonto on the movie set in Umahia, Tonto is really playing the role well and also taking it very serious.

This ponders Nollywoodgists.com whether Tonto Dikeh is planning to tie the knots soon.