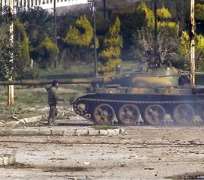 The U.N. human rights chief accused Syrian President Bashar al-Assad of launching an "indiscriminate attack" on civilians to end pro-democracy protests and said he had been emboldened by the failure of the Security Council to condemn him.

Hours after the speech by U.N. High Commissioner for Human Rights Navi Pillay, Syrian troops resumed their bombardment of districts in the central city of Homs, making Tuesday the 10th day of shelling and sniper fire on the city.

Pillay told the 193-nation U.N. General Assembly the February 4 veto by Russia and China of a draft Security Council resolution condemning the Syrian government and endorsing an Arab League plan for Assad to step aside had encouraged Damascus to intensify its attacks.

"The failure of the Security Council to agree on firm collective action appears to have emboldened the Syrian government to launch an all-out assault in an effort to crush dissent with overwhelming force," Pillay said.

"I am particularly appalled by the ongoing onslaught on Homs ... According to credible accounts, the Syrian army has shelled densely populated neighborhoods of Homs in what appears to be an indiscriminate attack on civilian areas."

An Arab League proposal to boost support for the uprising and send in foreign peacekeepers has drawn a guarded response, even as Syrian forces bombarded opposition strongholds.

Activist Mohammad al-Homsi said the situation was getting worse. "Army roadblocks are increasing around opposition districts, there is a pattern to the bombardment now. It is heavy in the morning, then gives way to an afternoon lull and resumes at night," Homsi said from the city.

"Shells are falling at random, almost everyone in a residential building in Baba Amro has moved to the ground floor. It is normal to find up to six families living together on the lower levels," activist Hussein Nader said by phone from Homs.

Shelling was also reported in the town of Rastan early on Tuesday. Reports of action on the ground are difficult to verify because Syria restricts access by journalists.

At the United Nations, diplomats said a draft General Assembly resolution which "fully supports" the Arab League plan and introduces a call for the appointment of a joint U.N.-Arab League envoy, could be put to a vote later this week.

The resolution, seen by Reuters, is similar to the vetoed Security Council draft, but there are no vetoes in General Assembly votes and its decisions are not legally binding.

"The situation on the ground is unbearable," the Qatari president of the General Assembly, Nassir Abdulaziz al-Nasser, told Al Jazeera Television. "There is an idea for an Arab draft resolution, which I think will be distributed to the member countries today or tomorrow and will be voted on this week."

The United States and Europe are reluctant to get dragged in militarily. Given Syria's position on the region's religious, ethnic and political faultlines, they fear this would be more risky and complicated than the NATO-led air support that helped Libyan rebels oust Muammar Gaddafi last year.

British Prime Minister David Cameron and U.S. President Barack Obama agreed in a phone call on Monday on the need for "international unity ... including further action at the UN and a broad and strong coalition in the new Friends of Syria group," Cameron's spokesman said.

The two leaders also "discussed the possibility of increasing the pressure on the Assad regime through additional sanctions," the spokesman added.

U.S. Secretary of State Hillary Clinton said in Washington that the peacekeeper proposal would be tough to get through given Russian and Chinese support for Damascus.

"There are a lot of challenges to be discussed ... and certainly the peacekeeping request is one that will take agreement and consensus," Clinton said.

Russia, Assad's close ally and main arms supplier, said it could not support a peacekeeping mission unless both sides stopped the violence first.

China backed what it termed the Arab League's "mediation" but offered no clear sign of support for the call for a joint peacekeeping force.

"Relevant moves by the United Nations should be conducive towards lessening tension in Syria ... rather than complicating things," Chinese Foreign Ministry spokesman Liu Weimin said.

British Foreign Secretary William Hague said any peacekeepers should come from non-Western nations whereas French Foreign Minister Alain Juppe said: "We think that any external military intervention would only make the situation worse..."

A peacekeeping mission would in any case require the cooperation of Syria, which dismissed the League's resolution as a "hostile act that targets Syria's security and stability."

OVERNIGHT SHELLING
In her speech, Pillay said the Syrian army was implementing a "shoot-to-kill" policy. "Extensive reports of sexual violence, in particular rape, in places of detention, primarily against men and boys, are particularly disturbing," Pillay said.

Activists said the ferocity of the attack on Homs had fuelled public outrage inside Syria, prompting more demonstrations against Assad in the last few days.

YouTube footage showed what appeared to be thousands of people protesting at a street rally in the town of Kernaz in the countryside north of the city of Hama, 50 km (30 miles) north of Homs. "God salutes the Free Syrian Army," they chanted.

In Homs, government troops concentrated their fire on Baba Amro in the south and al-Waer in the west, which borders the Military College, a main assembly point for tanks and government troops, opposition campaigners said.